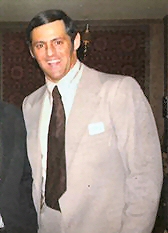 Sam DeLuca is best remembered as a standout offensive guard for the University of South Carolina, the 1963 American Football League champion San Diego Chargers and then the New York Jets, as well as the radio color commentator on the Jets broadcasts on Musicradio77 WABC and then WOR-AM before working telecasts for NBC Sports and on the Jets’ pre-season games in the 1970’s and 1980’s.

However, in 1968, about 10 months before Sam and longtime play-by-play announcer Merle Harmon called the Jets historic victory over the Baltimore Colts in Super Bowl III on Musiradio77, he embarked on his first regular sports casting assignment: The pre- and post-game shows for the New York Mets radio broadcasts on WABC-FM.

Sam said in a June 28, 2009 phone interview with Musicradio77.com that WJRZ in New Jersey had the rights to the games, but the Mets wanted to also have their schedule broadcast on a station with a signal that would reach Connecticut and Suffolk County on Long Island.

“FM radio was just coming into its own,” Sam said regarding the radio band that roughly a decade later would start to relegate much of AM to talk, sports and news and had an impact on WABC-AM moving from music to talk.

“Obviously they weren’t going to put the games on WABC-AM, since it had such an audience for its Top 40 music,” he said of the popular station that was starting to dominate the New York City ratings.

The Mets, which had an announcing crew of Bob Murphy, Lindsey Nelson and Ralph Kiner from their inaugural season through Lindsey’s departure following the 1978 campaign, had been on WABC-AM in the early 1960’s, when the station’s sports director, Howard Cosell, and former Brooklyn Dodgers pitcher Ralph Branca handled the pre- and post-game shows.

Ralph Kiner still occasionally works on the television games and Bob Murphy was on the Mets’ radio network through the 2003 season, just less than a year before he died.

Sam’s playing career had ended when he injured his knee in the final 1967 pre-season game.

About a month later when there was an announcers’ strike he was the color commentator, working with WABC General Manager Wally Schwartz, on two of the Jets games that were broadcast on Musicradio77 WABC.

That led to his assignment with the Mets that next spring and then a place alongside Merle Harmon on the Jets broadcasts starting in the fall 1968.

To learn more about baseball, Sam sought out Phil Pepe, then a baseball writer for The New York Daily News and later a sportscaster at WCBS-FM, who had graduated a year ahead of him at Lafayette High School in Brooklyn.

“I met with him at his home and he filled me in about some of the players,” he recalled.

Sam said that he also knew Joe Pignatano, the Mets, bullpen coach, who introduced him to manager Gil Hodges and the other coaches when he arrived for a visit to St. Petersburg, Fla., where the Mets trained at Al Lang Field.

He said that one night he went with first base coach Yogi Berra, the Hall of Fame catcher, and some of the other coaches to a local dog track and Yogi instructed him to just wave as he did when they got to the gate.

The attendants let them all pass by and Yogi took them up to the owners’ box at the track.

Sam said that he was impressed with Gil Hodges, who would die in 1972 while playing golf during an off day from spring training.

“Gil was very gracious,” he said. “He treated me as though I was a former baseball player, not a former football player.”

“He was a great evaluator of talent,” Sam said of the former Dodger all-star’s attributes as a manager. “He also didn’t have to shout to maintain control.”

Sam, who did the home pre- and post-game shows from the Mets locker room, said he had an inauspicious start.

“Howard Cosell said my first few shows were horrible,” he recalled with a laugh.

“I worked hard at it,” Sam said, noting that the player he most often sought out for insight into the game was Hall of Fame pitcher Tom Seaver, who in 1969 won the first of his three Cy Young awards.

“Tom was very smart and thought about the game,” he said.

“He was patient with me and helped me analyze baseball, Sam said.

Upon arriving in St. Petersburg in early 1968, at a time when the Mets still hadn’t finished higher than ninth place in the 10-team National League since their inception in 1962, Sam said he was struck by the differences in how baseball and football players prepared for the regular season.

“It was different than football, where you had nightmares about the two-a-day practices,” Sam said.  “This was more like going to a picnic. Players left the field almost at will and would go into the clubhouse and change their shirt.”

He said that although the 1969 Mets, who won the first of the franchise’s two world titles, were considered a Cinderella team, entering the season he thought that they would be a contender because of their emerging pitching staff – which included Seaver, Jerry Koosman, Gary Gentry and Nolan Ryan, as well as a relief corps that was led by veteran Ron Taylor and the up-and-coming Tug McGraw.

He said that “everyone in the Mets’ organization said that” Whitey Herzog, who was a coach with the team in 1966, helped build the farm system during his six subsequent years in the front office, where he primarily oversaw the team’s minor league operations.

Whitey later had much success managing the Kansas City Royals to American League West Division titles from 1976-1978 and the St. Louis Cardinals, who he directed to a world championship in 1982 and National League pennants in 1985 and 1987.

“The confidence was building by 1969 and I think after they picked up Donn Clendenon [from the Montreal Expos], they had more hitting to go along with the pitching,” Sam said regarding the June trade that was made that year.

They trailed the Chicago Cubs by 9 and half games in mid-August and then won 39 of their last 50 games and took the National League East title by eight games.

They then swept the Atlanta Braves, including future Hall-of-Fame slugger Hank Aaron, in three straight games before capturing the World Series over the favored Baltimore Orioles in five games.

Sam, who was a classmate of Sandy Koufax’s at Lafayette High School, recalled that the vaunted left-handed pitcher played first base for a while because he had control problems on the mound.

He said during that period one of the starting pitchers on the Lafayette team was Fred Wilpon, now the owner of the Mets.

Sam also has a connection to the team through his son, Sam Jr., who spent 2007 in the Mets’ farm system as an undrafted free agent after a standout career as a second baseman at St. John’s University.

Sam, who lives in Pelham, N.Y. said that his son is now in his second season in the independent Frontier League.

He said that it is difficult to believe that the Mets are now celebrating the 40th anniversary of their first world championship.

“I always liked Shea Stadium,” said Sam, who noted that he hasn’t been to a game yet at the team’s new home, Citifield, which opened this spring.

“I played in the first football game at Shea Stadium in 1964,” he said. “It was an exciting place to be, partly because the World’s Fair was next door those first two years.”