In the early days of Musicradio WABC, the production
of an on air show involved three people;
the DJ, the engineer and the director.

Barry Downes was a director at WABC when the station first became Top 40.
It was his job to coordinate what went on in the studio.
Of course, as time went by, the director was eliminated and today
most music formats don't have an engineer either.

Barry has had an interesting career both in and out of radio
and has memories of the first few years of Musicradio WABC.
Scott Benjamin caught up with him for an interview 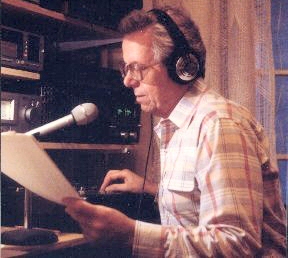 Barry Downes, who was a director at Musicradio77 WABC from the days before it played Top 40 hits to the start of its heyday as the nation's most listened to rock station, said that after entering the profession in the late 1950s, he began to see that directors were going to become obsolete in radio.

As turntables were replaced by tape cartridge machines and the engineers at WABC were put in the same room with the air personalities in the mid-1960s, Barry said he believed that the radio director's position would soon become obsolete since there was no longer much need to have a traffic cop in the studio.

"I could see with the technological changes in radio that directors were going to be phased out and the future was in television," he said in an Oct. 20, 2006 phone interview with Musicradio77.com.

In the early 1950's Barry as a student co-produced and directed a radio series at WKCR, the campus station at Columbia University, which later was picked up by NBC's flagship station in New York and broadcast weekly. Later, after a short stint of active duty in the Army, he joined WABC.

His father, Ed Downes, was a well-known radio director who directed many of the most popular shows with stars such as Kate Smith and Orson Welles and later moved to television, where he worked as a producer on Robert Montgomery Presents and later joined United Artists Television as head of program development.

Barry arrived at WABC just before the payola scandals rocked the radio industry.

"The record promoters could be very aggressive," he said of the efforts to get their label's songs played on the radio. "On a few occasions I can remember ducking into a nearby stairwell to avoid listening to their pitches, which sometimes included direct hints of bribes."

"The industry was freaked out, and understandably so," Barry said of the scandal, which led, for example, to the demise of rock & roll pioneer Alan Freed, a popular air personality at New York City's WINS.

However, regarding the use of payola to get a song on the air, Barry said he agrees with Dick Clark's statement in his 1976 autobiography "Rock, Roll & Remember" that if the record wasn't good to begin with, no amount of air play would make it a hit. Barry also added it was equally true, then as today, that without a lot of pushing and money behind it, an unknown new song stood little or no chance of finding an audience in radio. Dick Clark, by the way, was one of the entertainment figures that testified before Congress during the payola hearings in the early 1960s.

Barry believed that legendary WABC program director Rick Sklar, who worked at WINS at the time of the scandal, was correct in going to great lengths to protecting WABC years later from any hint of payola.

Musicradio77.com has reported that Rick based the weekly music survey strictly on the sales from a random number of hundreds of record stores in its primary listening area.

Former WABC assistant program director Julian Breen said that the paperwork on the sales was kept for three years to document why a certain song rose up the Top 20 survey that debuted each Tuesday night.

Barry remembered that during his time at WABC, which extended into the mid-1960s, "Rick was the dominating factor at the station. He certainly was the genius pulling the strings on all music programming."

"He also paid a lot of attention to what was happening in other parts of the country," Barry said. "He would seek audition tapes from air personalities without really necessarily having much interest in hiring them. Most importantly he wanted to listen to their air checks to find out what was happening at different stations across the country and what he might learn to make WABC even better."

It was common knowledge WABC succeeded, in part, because of its short play list and a rotation that at one point required playing the number one song every 60 minutes.

Through the years, Barry worked with many of the air personalities at WABC, as well as noted sportscaster Howard Cosell, who did the pre-game shows for the New York Mets and New York Jets broadcasts in the 1960s and sports commentaries.

"Cosell was an amazing, if not always loved, talent in the studio," he recalled. What was particularly striking was the sportscaster's ability to ad lib faultlessly. "If you suddenly needed him to fill for 12 minutes and 30 seconds, he would do it exactly to the second and be interesting the whole time."

After leaving WABC, Barry went on to television, working as a writer and/or producer with such luminaries as Bob Hope, Paul Newman, Frank Sinatra and Fred Astaire. He also wrote a number of live television events for NBC's presentation of the annual Tournament of Rose Parade in Pasadena, Calif. on New Year's Day and the Macy's Thanksgiving Parade in New York City on Thanksgiving Day.

Today, Barry and his wife, Helene, also a writer and television producer, live in New York City and head One To One Communications, Inc. which integrates writing and music into a variety of projects, including the development of the largest computer search engine and database to search for melodic matches or similarities in popular or classical music. Among the clients who have used this unique service are Mariah Carey, Michael Jackson, Lionel Richie, Madonna, Mel Brooks, Michael Bolton, Andrew Lloyd Webber, Prince and many others.