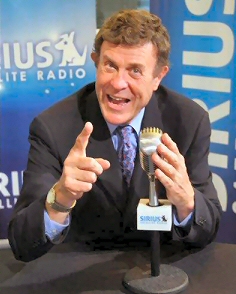 Cousin Brucie – who from 1961 to 1974 could be heard in about 40 states and some foreign countries depending on how the powerful, 50,000 watt signal of musicradio77 WABC traveled – now will be able to be heard with even better reception around the world as he offers his trademark “Yeeee” on Sirius satellite radio.

“Besides the fact that there are no commercials on the music channels, let’s not sell the technology short,” Brucie said of the potential of Sirius. “Satellite radio allows me to be heard by people in California and Florida and the hills of Michigan who might have listened to me years ago when they lived in or near New York City.

“This also is an opportunity for people who have never heard one of my shows but have heard about me, to tune in and find out what Cousin Brucie is all about,” he added during a phone interview Aug. 2 with musicradio77.com.

For example, The New York Times reported last month that XM, the other satellite network, has discovered that many transplanted fans have rediscovered favorite sportscasters – such as the Dodgers Vin Scully, a New York City native – as a result of the Major League Baseball package that it started offering this season.

Brucie, who has a street named after him in the New York City borough of Manhattan, will make his regular debut Saturday, Aug. 27 – just 12 weeks after his long career at WCBS-FM in New York City ended when the station abruptly changed its format from oldies to the Ipod-inspired Jack.

Brucie, who is known for his exuberant delivery and zany ad-libs, will be on Sirius channel 6 Saturdays from 8 p.m. to midnight and Wednesdays from 8 to 11 p.m. and will also do a talk show - “Talking To The Cuz” – on a new Sirius channel Thursdays from 5 to 7 p.m., all eastern time.

He said the Wednesday show will include features on the Academy Awards, Cousin Brucie’s Magic Circle and one-hit wonders and the Saturday program will be similar to the party show that dates to the 1960s at WABC when it was becoming the most listened to station in the nation.

Additionally, he will host several short features that will be used on Sirius music channels – such as Cousin Brucie’s History of Rock & Roll.

“At last I’m free,” he said of the talk show, which will include discussion of music, life styles and politics with guests and listeners.

In fact, WABC offered legendary musicradio77 afternoon personality Dan Ingram the chance to host a talk show when it switched from music to talk in May 1982.

Brucie did a music show from the Rock and Roll Hall of Fame in Cleveland July 1 for Sirius, and a Motown special that he taped for PBS television aired Aug. 6.

However, he said when he negotiated with executives from the satellite network, which is based in New York City, he told them that he “wanted to take the summer off.

“This is the first summer that I have had off since high school,” said Brucie, who spent part of the last two months at the upstate New York home that he shares with Jodie, his wife. “Having some time off has given me a chance to relax and also to prepare for my first shows on Sirius.”

Sirius announced six days after WCBS-FM changes formats that it had signed Brucie – who has followed satellite radio closely as a subscriber to Sirius and XM.

“What XM and Sirius have to do is give people something that they’re not getting from the non-satellite stations,” he said in an interview with musicradio77.com last January. “You just can’t play taped shows with long tracks of records. The satellite networks need to do more live shows, because right now they sound very canned.

“But I think there will be a natural progression to where there is more personality and they will provide programming that isn’t often available elsewhere,” he added last winter. “HBO was laughed at when it first came out,” he said of the subscriber cable television network. “But when it started presenting material that you couldn’t get elsewhere, it became a success.”

Brucie said that his contract stipulates that all of his shows will be live unless he decides otherwise.

He said that he believes that the recent developments indicate that the satellite networks are offering more personality-oriented programming.

“It’s on the way,” Brucie said “The first thing was the marketing and then mastering the technology. Then you address the aesthetics. I think that is happening with the way that Sirius is collecting some high profile personalities and stars.”

Pat St. John and Bill Rock, who worked with Brucie at WCBS-FM, are currently on Sirius channel 6 and other recognized personalities such as former MTV video jocks Mark Goodman, Nina Blackwood and Alan Hunter are on channel 8.

“Once someone gets a satellite radio, that satellite network becomes their primary source of radio,” Brucie said. “However – and this is a big however - terrestrial radio will always be with us because people want to have a local connection as well.

“What probably will happen is that the satellite networks will dominate, in particular, with music,” he added. “AM and FM will have to find another niche,” he added.

Brucie said that he will continue his ambitious schedule of appearances on the PBS rock and roll specials that he has done over the recent years.

“In fact, the people at Sirius want me to do that because it will get the word out even more about their network,” he said.

The changes at WCBS-FM came after it had been an oldies station for 33 years – billing itself as the most listened to sold gold station in the country. Brucie started working there in 1982.

“I think the anger has quelled and it is more a case of disappointment now,” Brucie said regarding the new format. “They didn’t give the audience a chance to absorb the change.

“I think this Jack format is boring, bland and emotionless,” he added. “I think it’s going to fall on its face in the New York market.

“In most major markets after two or three [ratings] books, the numbers just don’t hold,” Brucie continued. “In fact, the oldies stations in those markets get better ratings.

“I miss going in to CBS-FM to do my Wednesday and Saturday shows,” he said. “It had been a fun and relaxed placed to be until the last few years.”

“People I meet in restaurants say they feel bad about what had happened, and say that they listened to me every night,” Brucie said. “I was there for so long that some people had the impression I was on the air six nights a week.

“They’re telling me that they’re going to get a Sirius radio because they want to listen to Cousin Brucie,” he added.