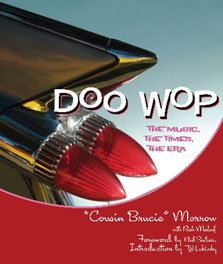 Cousin Brucie, who has long been critical of the “bean counters” and “captains of business” whom he believes have ruled the music and radio industries through the years, has published a book that he hopes, among other things, “will keep the flame alive” regarding the music from the first 15 years of rock ‘n’ roll and the songs that earlier established the framework for that era.

“I was concerned that this music would disappear from our culture,” Brucie said regarding part of his motivation for writing and assembling “Doo Wop: The Music, The Times, The Era” from Sterling Publications (352 pages, $24.95, U.S.; $29.95 Canada). It is a large coffee table-style book with many vignettes on the groups of the 1950s to late 1960s, as well as question and answer pages with people in the entertainment industry and historic photographs.

“Music is good no matter how old it is,” he said. “You don’t put an age on Beethoven.”

“You can easily tell what was happening in politics, television and with clothing,” Brucie said of the “sidebar features” on the culture of the era.

Brucie, who was a popular night air personality at Musicradio77 WABC from 1961 to 1974, has been with Sirius since the summer 2005, signing with the satellite network just six days after WCBS-FM in New York City, where he had worked since 1982, changed from an oldies format to the iPod-inspired JACK rotation that has been used in several markets over the recent years.

He signed a new contract in September that will likely keep him at Sirius for six more years.

“I have the freedom to program my own shows,” he said regarding one of the reasons for his decision to stay with the satellite network.

Brucie’s shows include a wide variety of music, including songs that received little airplay when they were released.

“The audience is more sophisticated today,” he said in an Oct. 25, 2007 phone interview with Musicradio77.com. “They don’t want to just hear the biggest hits of Elvis Presley, they want to hear songs that weren’t played as much. It isn’t the same as the days of the short play list at WABC.”

He said that the proposed merger announced in February between Sirius and satellite radio rival XM would benefit many people.

“I would encourage the federal government to approve the merger as soon as possible,” Brucie said. “I think it will generate even more channels for listeners and it will create more jobs.”

He said that Sterling Publishing contacted him about writing a book. His earlier work, an autobiography -“Cousin Brucie: My Life in Rock ‘N’ Roll,” co-authored by Laura Brado - was published in 1987.

“This is not a scholarly book,” Brucie said of “Doo Wop.”  “That would be boring.”

“There are a lot of short features and some rare photos,” he added. “People who are not from that era, would be interested in it,” he said.

“Doo Wop” is co-authored by Rich Maloof, a writer who lives in Maplewood, N.J. Brucie said Rich spent hours interviewing him at the home that he and his wife of 33 years, Jodie, share in Manhattan.

“We would sit and do an interview and outline a chapter,” he said. “Since Rich is only [41 years old], he did not live through that era. He would ask me to explain things, to clarify.”

In a review, Publishers Weekly wrote that the book “displays a comfortable, conversational writing style that works well in this picture-heavy format.”

“One of the things that I’m proud of is that we got his familiar, friendly voice and his warmth and charisma across in the pages,” Rich Maloof said in an Oct. 30, 2007 phone interview with Musicradio77.com.

Rich said he got the assignment as an outgrowth of being part of the editorial team that conceived it “from the ground up.”

“Bruce was easy to work with,” Rich said. “It was unusual to hear him speak in person during the interviews because it seemed as though I should be listening to him through a three-inch transistor radio.”

“Doo Wop” officially went on sale Nov. 1, but some copies were sent to book stores prior to that and have prompted what Brucie described as “a tremendous response in terms of e-mails and in calls to me at Sirius.”

“It’s a fierce market for books right now,” Rich said. “Everyone is fighting for shelf space in the stores and paper costs for the pages of the books has gone through the roof.”

In addition to Rich, Brucie said he spoke at length with former longtime WCBS-FM program director Joe McCoy about the contents. Brucie said in a January 2005 phone interview with Musicradio77.com that Joe is probably the best program director that he has had in a career that now spans half a century.

In interviews at the time, Brucie criticized the WCBS-FM’s decision in June 2005 to change from the oldies format that it had adopted in 1972, predicting the demise of the JACK format that replaced it. By then, Joe McCoy had left the station.

WCBS-FM returned to oldies in a modified form on July 12 of this year, but Brucie said he declined an offer to return to the station, where he had done a Wednesday and Saturday night show for many years.

“I was thrilled that WCBS-FM wanted to end the JACK format, but they have come up with an adult contemporary sound, not what they promised in terms of being an oldies station,” Brucie said.

Former Musicradio77 WABC air personality Mike McKay, who was a listener of Brucie’s while he grew up in Brooklyn, said in a phone interview in March 2007 that the Big Hits format of more music from the later years has been a trend among oldies stations over the last three to four years.

Brucie believes that the more conventional oldies format can still be very successful, noting the huge audience for the oldies channels on Sirius and on XM satellite radio and for the oldies television specials that he hosts for the Public Broadcasting Service (PBS).

He has said that radio executives are afraid to take chances.

“You can’t always go with the easy decision,” Brucie said. “You have to dream and aspire to things. That’s how you improve and create.”

Former ABC News and Sports President Roone Arledge said in the 1988 book “Monday Night Mayhem,” by Marc Gunter and Bill Carter, which covered  the early years of “Monday Night Football,”  that if, for example,  people had been unwilling to take chances, there never would have been a cable sports network such as ESPN.

Through the years, Brucie has been critical of owners and executives who have lacked courage and imagination.

Although he has said that he has the utmost respect for legendary former Musicradio77 WABC program director Rick Sklar, he has been critical of the short play lists that Rick used at the station.

In a 1987 interview on the now defunct WNBC radio with Alan Colmes to promote his earlier book, Brucie said that radio stations were starting to resemble real estate development companies, causing them to lack creativity.

Regarding “Doo Wop,” he said that he insisted that a section be devoted to the early African music, which led, he believes, to “rhythm and blues and soul.”

He said that the Northeast has had the most influence on rock and roll, with New York City being the leader. However, he said that per capita, Philadelphia probably has had as much influence.

Former Musicradio77 WABC air personality Jim Nettleton said in an April 2004 interview with Musicradio77.com that 64 notable rock and roll acts  grew up in Philadelphia within 16 blocks of each other.

Brucie said that the Beach Boys, who also are featured in the book, adopted some of the vocal harmonies of the Mills Brothers, Ink Spots and the Platters

“They turned it into a west coast sound, and it is very different from Philadelphia and New York,” he said.

On another topic, Brucie said that he agrees with longtime rock singer Jerry Butler that much of the music from the 1950s to the mid-1970’s had themes related to love.

“If people listened to music we would have peace,” he said. “It is a common language. You could take away the politicians and the soldiers and everything would be calm. “I find today that there is a lot more hostility in the music.”

The longtime air personality, who had part of West 52nd Street in New York City named after him by then New York City Mayor Rudy Giuliani in 1994, also provides a dictionary of terms from era and lists   the top 140 Doo Wop artists of all time.

Brucie said he vowed 20 years ago after his autobiography was published that he would never again do a book tour.

“I reneged on that,” he said, referring to the ambitious schedule of book signings that he had scheduled between Nov. 1 and 29 in which he would travel to such cities as Cleveland, Tampa, Philadelphia, San Francisco and Los Angeles.

“The problem is the travel,” he said. “You are up early in the morning, doing interviews and signings and then you hop on a plane to the next city,” he said.

Rich said he would be joining Brucie for some of the New York City-area book signings and possibly the Cleveland event at the Rock ‘N’ Roll Hall of Fame.

Brucie said because radio and music have become bigger businesses, “it is more difficult to get discovered by the recording industry today. You have groups being established about 20 feet from each other and they’re all trying to get on American Idol or some other show because that would be their one opportunity.

“The music industry is so much into bean counting that the people don’t want to take as many chances,” he said. “Plus you don’t have the crossover appeal from one format to another or a wide variety of songs in one format as you had years ago with Top 40 They’re targeting specific audiences They want the 23 year olds that brush their teeth three times a day.”

Singer Neil Sedaka, a longtime friend and fellow Brooklyn native, wrote the foreward, as he also did for Brucie’s autobiography.

“I couldn’t think of anybody better because he has adapted to the history of rock and roll through the years,” Brucie said.

His cohort at Sirius and PBS, T.J. Lubinsky wrote the introduction.

Brucie said that work already has begun on his next book, which will cover the period from the late 1960’s through 1975. He hopes that it will be published in 2009.

“There’s nothing wrong with youth being served,” he said. “But this isn’t 1948 anymore. People are living longer, staying active longer and they love this music, which will be with us forever.”