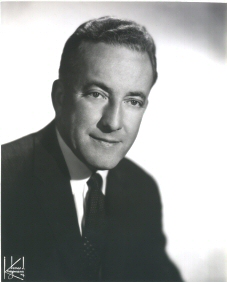 Carl Caruso - the ABC staff announcer who had the deepest voice this side of Righteous Brother Bill Medley, Lou Rawls and Barry White combined - was built more like a distance runner than the Jolly Green Giant.

Remarkably, Carl had a career that lasted from the era of radio dramas into the Internet age.

Susan Caruso, one of his daughters, said in a Jan. 26, 2007 phone interview with Musicradio77.com that Carl was only 5-feet, 8-inches tall and had a slight to medium build.

"He had a very distinctive voice," Susan said. "I would be watching television, half paying attention, and then I would hear his voice and know that it was my dad."

"There was some repartee between them when my dad did the news on Dan's show," explained Susan, who is the director of human resources of the Girl Scouts of Nassau County, Long Island.

"I remember listening to how Dan would say something like, my dad's voice was as low as a snake on its belly resting near the Holland Tunnel," she added regarding her father, who died on Aug. 26, 2001.

As was the case with the other ABC staff announcers of that era, Carl - who had moved his family to Rosalyn, Long Island - did promos and station breaks for WABC-TV Channel 7 and the ABC television network, as well as newscasts for WABC AM and FM.

Former ABC Information Radio Network newscaster Bob Gibson stated in a Jan. 27, 2007 e-mail message that "it was always an honor, on the few occasions that it happened, that Carl was assigned to read the opening and the billboard on my newscast. I figured if he couldn't get the attention of the audience with that powerful voice, who could!"

In the early to mid 1960s, the group of 27 staff announcers included such standouts as Milton Cross, the voice of the Metropolitan Opera; Fred Foy, the narrator on the radio and television versions of "The Lone Ranger"; Joel Crager, who once was more in demand than any commercial voiceover artist; and George Ansbro, who had been the announcer for old-time radio shows, including "Young Widder Brown."

The only remaining member of the group from the 1960s still at ABC is Bill Rice, whose duties include working as the announcer for "World News With Charles Gibson."

Carl, a handsome man with curly black hair, had been the announcer for the "The Shadow" radio drama from 1949 to 1951.

The long-running drama was voted into the Radio Hall of Fame in 1989. The announcer read the famous opening: "Who knows what evil lurks in the hearts of men? . . . Ha, ha haaa. . . The Shadow knows."

Carl also handled the announcing billboards for such television shows as "Father Knows Best," "Lassie" and "Car 54 Where Are You?"

He hosted some television shows during the early years of the medium and did voiceovers in radio and television for a raft of prominent clients - including Chevrolet, Red Rose Tea, Shell, REC, Breck, Bayer Aspirin, Scott Tissue, Lipton, Avon and Dove.

Carl also was a highly sought-after master of ceremonies, who had the assignment in 1944 of handling a Jordan Marsh Lincoln's Birth Bond Rally that featured Navy Lt. John Kennedy of Boston.

He grew up in East Boston and met his wife, Anne Carmerlengo, while they worked together in local theater during their teens.

"The gorgeous timbre of his voice plus his Beantown diction inevitably led him before the mike," a 1954 news release stated.

Carl won a scholarship to the Leland Powers School of Theatre and Radio in 1936 and worked at WHDH and WEEI in Beantown before becoming the chief announcer of the Westinghouse New England chain of stations.

However, he eliminated the Boston accent and in 1946 moved to New York City to join WOR as a radio and television staff announcer and the Mutual Radio Network.

He did extensive commercial voiceover work in the late 1950s, but then opted to become an ABC staff announcer in 1962.

Bob Gibson described Carl as "a very outgoing guy" who was well liked by the other staff members at ABC.

Susan - who has a twin sister, Annette, who recently retired as a Behavioral Sciences professor at Penn State University, and a brother, Carl, who lives in New Hampshire -said her father long had an interest in cooking.

"He had such a reputation for cooking that there even was a publicity photo of him cooking spaghetti," she recalled

In the mid-1970s, he opened Caruso's Back Stage Café, an Italian restaurant with 10 tables and a long bar at Columbus Avenue and 68th Street.

"He would be in the kitchen and also serving customers," she said regarding how the restaurant became a source of enjoyment for him.

"He always dreamed of owning a restaurant," said Susan, who added that Caruso's Back Stage Café was only open about three years due to a fire that damaged the building.

Carl's wife died in the late 1970s and in 1979 he married Kathi Norris, who had hosted a show in the 1950s on the now-defunct DuMont network and also did a women's view segment on The Today Show on NBC.

Carl and Kathi moved to Venice, Florida in the late 1980s initially to tend to one of Kathi's aunts who had suffered a stroke.

"He said that he would never move to Florida, but he found that he liked it," Susan said. "He would play golf and go out on his boat fishing on the west coast of Florida."

She said that he was a master of ceremonies at local events there for several years.