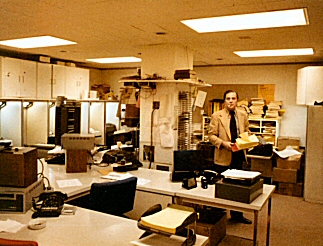 Gus Engelman in the WABC Newsroom
(1978)

Gus Engelman, a hustling New York street reporter, enjoyed a career in which he was a protégé of Walter Winchell, covered the police beat for a music radio station that was the most listened to in the land and then practiced and eventually taught the art of public relations.

"He was the finest street reporter we had in my days at WABC; a man who could rush to the scene of a breaking story, get the essential facts, and get them on the air fast," former afternoon-evening news anchor Bob Hardt wrote in a June 17, 2007 e-mail message to Musicradio77.com.

"Gus had the ability far too many of today's radio and TV reporters have yet to develop; the ability to ad lib a story from the jottings on his note pad without a script and to do it without murdering the English language," Bob added. "He was the one reporter we never had to re-write before he filed."

"Gus had a catalogue in his head of facts, figure, politicians and political scandals," former WABC morning news anchor John Meagher stated in a June 15, 2007 e-mail message to Musicradio77.com.

John, who met Gus after John arrived at WABC in March 1968, stated, "Over the next 33 years - even after I moved to [all-news 1010] WINS - [Gus] was among the folks I would consult for background of various political issues which had their roots in the years way before I arrived in town."

"If he did not have an answer - Gus always had an opinion," he added.

During that career, Gus was able to easily banter with ABC sports commentator Howard Cosell, who called him "Goose."

"It was probably because they were both Jewish and from Brooklyn," Linda Meilan, his wife, said regarding the friendly discussions that Gus, a longtime reporter for Musicradio77 WABC, had in the newsroom with Howard, who became a legendary figure in sports broadcasting.

Linda, who worked in positions ranging from traffic to programming to sales during a tenure that spanned from 1963 to 1986 at WABC, said that Gus began his career in 1950, at age 17, as a copy boy for The New York Journal American, at a time when the Big Apple had more daily newspapers than boroughs.

In addition to working at the newspaper, he attended Brooklyn College.

Linda said that her husband, who died in 2001, became well-liked by Walter Winchell, who Wikipedia.org reports was the writer that "invented the gossip column," and also became friends with Dorothy Kilgallen, the syndicated columnist who also was a regular panelist on television's "What's My Line."

Gus established a reputation as one of the best police reporters in Gotham City.

Linda said that there is a photograph of him interviewing Marilyn Monroe in Manhattan immediately after it was learned that Clark Gable had died. Gus was the first to notify the famed actress.

"He sometimes told stories of being in the gaggle of reporters who accompanied former president [Harry] Truman on his Manhattan walks," John stated.

He wrote that Gus served in the U.S. Army's Criminal Investigation Command in the early 1960s in Cold War Berlin.

"He smiled but refused to answer when asked if he and his buddies ever kidnapped a Soviet Spy. . . . or perhaps even liquidated one!" John stated. "Always leave 'em guessing."

Gus and many other print reporters saw their newspapers fold in the mid-1960s as television started to have more of an impact.

The Journal-American became the World Journal Tribune before it went out of business.

In 1967, he became a reporter at Musicradio77 WABC as it was emerging as the most listened to station in the nation.

"It was a tough conversion at first," Linda said, noting that radio reporting was far more condensed.

However, she said that, in particular, Gus enjoyed doing longer reports for Perspectives and some of the other public affairs programs that ran from Sunday night into the wee hours of Monday morning.

However, he is best known for his coverage of breaking stories.

"Gus was out of there in a flash and reporting live from the scene in time for my 6 O'Clock Report," Bob stated. "We could have worked the story by phone, but Gus knew we would only be on top of it with a reporter out there."

Gus covered a fire on Fifth Avenue in which Linda's first husband - Frank Meilan, an architect - was killed less than a year after they were married.

They were mutual friends of John Meagher and his wife, Sally, and began dating some time later and were married in 1974.

Linda said that WABC's impact was so huge through the late 1960s and most of the 1970s, that Gus' regular taped reports on "The 6 O'Clock Report," which was anchored by Bob Hardt, generated enough attention that when he presented his credit card at a Mobil station, the attendant asked if he was the "Gus Engelman on WABC."

Bob Hardt said in an Aug. 1, 2003 interview with Musicradio77.com, that even before the deregulation years during Ronald Reagan's presidency in the 1980's, WABC and other radio stations were reducing their commitment to news.

"The whole news room started to realize that they were second-class citizens," Linda said of the changes that began in the late 1970's.

In the 1960s, the station had news at :25 and :55 of every hour throughout the day and night to conform to Federal Communications Commissions (FCC) standards.

"John Lindsay and everybody else wanted to be on WABC in its hey-day," Linda said, making reference to the former U.S. congressman and New York City mayor and other newsmakers who considered the station an important media outlet even though it mostly generated ratings by playing Top 40 music.

She said that Gus stayed with WABC after it made its conversion to a talk format in 1982 and was a frequent guest on Alan Colmes' overnight talk show, primarily discussing issues related to New York City.

"They really bonded," Linda said of Gus' interaction with Alan.

"Gus loved politics and police news," she said. "He also loved the restaurants and the theaters in Manhattan."

"Sportscaster Art Rust Jr. came aboard in the early 1980s, and as a non-sports fan, it was fascinating to witness Gus and Art in the newsroom, dueling over sports questions, flogging each other with little-known facts and records of baseball and its players," John Meagher wrote.

Linda said that Gus was an avid Dodgers fan who remained devoted to the team after it left Brooklyn following the 1957 season and went to Los Angeles.

Some time after the FCC standards were relaxed, Gus' street reporter position was eliminated and he declined an offer to work as a news writer.

"He wasn't a person to be working all day in a news room," Linda said.

She said that he was very active in the New York Press Club throughout his career.

However, Linda said even though he had a raft of contacts in print journalism, Gus never gave much consideration to becoming a newspaper reporter again.

She said that he saw that The New York Times, The Daily News and The Post were reducing their staffs.

Instead, he became the first director of public relations at the Jacob Javits Convention Center, which is named after the former longtime Republican U.S. senator from New York state.

"I don't think he initially was particularly interested in public relations, but he did enjoy it," Linda said.

"Imagine how much money he might have made if he had accepted," Linda said.

"He loved that," Linda said. "He was inspired by young people."

John Meagher recalled that as president of the New York Press Club, Gus had to arrange for a master of ceremonies each year at the Byline Ball, which was its annual charity event.

One year, Gus made a pitch to comedian Henny Youngman - the "king of one-liners" - to be the master of ceremonies over a speaker phone conversation that boomed through the WABC news room.

"Say, would you emcee the New York Press Club's Byline Ball, here in the city?" John recalled Gus saying. "It's a charity affair and doesn't pay anything, but it's great publicity."

"Gus, you know, charity begins at home," Henny replied. "When I do these things, you know, I have to be reimbursed for expenses. . . I'll need meals…. a hotel room…I'll have to have air fare. You know how it is. I couldn't do it for free."

"But, Henny, you live in New York," Gus said. "You'll be home. You won't need meals, or a hotel room or transportation."

"And he didn't," John wrote regarding how Henny finalized arrangements.