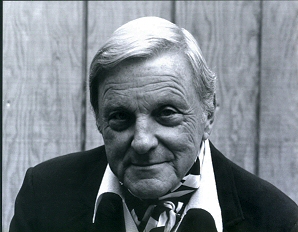 Hi-Yo Silver!
A fiery horse with the speed of light, a cloud of dust and a hearty "Hi-Yo Silver"... The Lone Ranger!
With his faithful Indian companion, Tonto, the daring and resourceful masked rider of the plains
led the fight for law and order in the early West.
Return with us now to those thrilling days of yesterday.
The Lone Ranger Rides Again!

Fred Foy was one of several ABC staff announcers who auditioned in early 1968 to work with comedian Dick Cavett, who ABC had hired to do a day-time television talk show that initially was called “This Morning.”

“The copy was simple – you just said who the guests were and announced that it was ‘This Morning’ with Dick Cavett,” he recalled.

“I knew the engineer in the booth and after I finished he said over the talk-back [speaker] that Dick would like to hear the opening to the Lone Ranger,” Fred added. “I found out that Dick was a Lone Ranger fan. I think that tipped things in my favor.”

“I never dreamed that the thrilling voice that brought the well-known thundering hoofbeats into my living room in Nebraska would some day announce my own show,” Dick wrote in the Forward to “Fred Foy from XYZ to ABC,” an autobiographical booklet that was published in 1986.

“We never thought that it would become a legend,” Fred said in a May 19, 2006 phone interview with Musicradio77.com when asked about the continuing interest in the radio version of “The Lone Ranger,” which he worked on from 1948 to 1955 from WXYZ, the ABC affiliate in Detroit, Mich.

Just days earlier he had received a call about a convention in 2008 to mark the 75th anniversary of the masked rider’s debut on radio.

Fred appears at a handful of conventions on the radio dramas each year, including the annual Friends Of Old-time Radio confab in October at the Holiday Inn in North Newark, N.J.

“I think the attraction to people is that you had this masked man fighting for justice,” he said. “At every opportunity he helped a troubled person. Plus, there was a bit of mystery about him.”

“It is unbelievable how many people want to hear that opening,” Fred said of the words that he delivered before the Lone Ranger and Tonto started their next adventure. “It’s wonderful to see the reaction.”

The Radio Hall of Fame, which inducted Fred in 2000, states on its web site that Fred’s introduction is “perhaps the most recognized opening in American radio.”

Bob Gibson, a former ABC Information Radio Network news anchor, said in a May 22, 2006 phone interview with Musicradio77.com that Fred’s wife, Fran, contacted him in the late 1990s to write a letter of recommendation for Fred’s nomination into the Radio Hall of Fame.

“I always thought it was a case of the tail wagging the dog,” he said, noting that it seemed that he should be asking Fred to write some kind of recommendation for him.

To this day, Fred’s home telephone answering machine tells callers that “the boys” are out on the range “with a friend.” He still signs autographs with, “Hi Yo Silver.”

He stated in his autobiography that he had wanted to be an actor while growing up and would go to the theater as soon as the marquee announced that a new show was playing.  The radio dramas also captured his imagination.

Shortly after graduating from high school in 1938 he started his career with a part-time position at WMBC, a 250-watt independent station in Detroit.

Ten years later while working as an announcer at WXYZ in Detroit he landed the position as the announcer for “The Lone Ranger.”

However, by 1955 television had become more accessible and “the advertisers wanted it just on the tube,” he said regarding the demise of the live radio version of the masked rider. He taped the opening for the television version in Detroit and it was shipped to Hollywood.

Radio at the time was making the conversion at the time from drama and comedy shows to Top-40 music.

Fred said that when he began “knocking on doors” in the early 1960s for an announcing position he met with Hal Neal, then the general manager of Musicradio77 WABC in New York City.

Fred said he began as a summer replacement ABC staff announcer, which led to a permanent position of delivering tags for commercials and doing newscasts for WABC-AM and FM as well as work for ABC television.

“We were in awe of him because we knew of how much he had accomplished before he got to ABC,” former WABC air personality and former ABC staff announcer Bill Owen, who arrived at ABC in 1960, said in an Apr. 26, 2006 phone interview.

“I was a young man when I got there in 1962 to do news and Fred and Carl Caruso, who also was great, were summer relief announcers,” Bob Gibson said. “I thought that this must be some kind of operation if the summer relief guys are the ones with the resumes and the wonderful credits.”

“I don’t think Milton ever knew how much his voice meant to people,” Fred said regarding his colleague’s career as the announcer for the Metropolitan Opera. Former ABC staff announcer Joel Crager said in an Mar. 8, 2006 phone interview with Musicradio77.com that Milton was noted for his charisma.

Bob Gibson said Fred has qualities that separate him from many other announcers.

“His voice is exceptional, but there was something about Fred’s diction that made you know that it was him,” he said. “There was nothing wrong with the other staff announcers’ diction, but Fred would round off every word and yet it didn’t sound pompous.”

Bob said Fred was particularly effective in his narration of the Year-in-Review news summaries. He included a segment from the 1962 Year-In-Review in the ABC Staff Announcers Reunion Tape that is posted at Musicradio77.com.

Fred said that some of the air personalities at WABC-AM would joke on the air with him after he finished a newscast about the Lone Ranger and Tonto.

Legendary WABC afternoon personality Dan Ingram called his listeners “Kemosabes” – a phrase from “The Lone Ranger” – and would sometimes mimic the masked rider while ad-libbing on the air.

Famed night personality Cousin Brucie said in a Jan. 12, 2005 phone interview with Musicradio77.com that he looked forward to getting the Lone Ranger ring that he ordered while growing up.

“I think the disc jockeys they had amounted to 90 percent of it,” Fred said regarding the success of WABC, which had 8 million listeners a week by the early 1970s. There were some day parts when one out of every four radios in New York City were tuned to Musicradio77.

WABC AM and FM both underwent changes starting in the mid-1960s. The AM side, at 770 on the dial, eliminated the Breakfast Club show and the nightly Newscope on Jan. 1, 1968. The FM side, at 95.5 on the dial, started to make a transition from light classical and Broadway music to progressive rock.

“I don’t think there was any concern about the changes,” Fred said regarding any potential impact on the ABC staff announcers. “We had our duties.”

By the late 1960s most of his work was as a sidekick to Dick Cavett, who went on to host an 11:30 p.m. talk show starting in late 1969 that competed with “The Tonight Show” with Johnny Carson on NBC and “The Merv Griffin Show” on CBS.

“It certainly was a more intellectual show than what had been on in late-night,” Fred said of Cavett’s approach. “Dick was more deeply into situations and what they had been doing and in talking about current events.

“He would interview someone like Katherine Hepburn for the full 90 minutes,” he recalled in contrasting the ABC show to The Tonight Show, which had long been the king of late night television.

Fred said he met some “fascinating” guests during the show’s five-year run, which ended Jan. 1, 1975.

In particular, he recalled speaking with dancer and actor Fred Astaire in the Green Room before a taping.

Dick had been a writer on The Tonight Show for Jack Paar and then Johnny Carson before becoming a stand-up comedian and then a talk show host. His show was one of several attempts by CBS and ABC through the years to compete in the ratings against The Tonight Show.

Wikipedia.org states that The Dick Cavett Show is “generally acknowledged as the most noble and worthy attempt to go head-to-head with the unassailable Carson.”

“We held our own, but I don’t think that anyone broke the barrier against Johnny,” Fred said regarding the competition from Carson, who TV Guide rated in the 1990s as the second biggest celebrity in the history of television, behind Lucille Ball.

“I don’t think anyone was as talented as Johnny,” he said. “He had a special personality.”

Fred said he has fond memories of his days with Dick, who sometimes used Fred as a foil for his comedy – even once throwing a pie in his face.

“He is a bright gentleman,” Fred said. “I only have the best to say about Dick.”

Through the years, Fred - who lives in Woburn, Mass., outside Boston – also was the voice the Rambler cars and  MGM Pictures, where he handled the commercial work for the 1965 classic “Dr. Zhivago” and some of the trailers that were used for the company’s other pictures.

He occasionally speaks about “The Lone Ranger” at schools.

“The kids always want to hear one more story or hear another cassette of one of the shows,” Fred said. “It is unfortunate that in this age we’ve largely lost our need to use our imaginations, which is what the radio dramas did.”