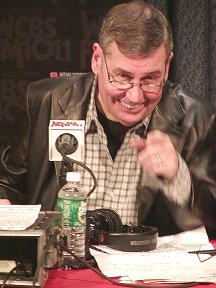 Legendary New York radio personality Harry Harrison concluded his 23 years at WCBS-FM on March 19, 2003 in front of an enormous crowd at the Museum of TV and Radio in New York City.  As was always true during his 44 years on New York radio, Harry did the program with class.  He thanked his "radio family" from all walks of life as well as his friends and close family.  There were touching moments, funny moments and classic Harry Harrison commentary.

One of the neatest things about the program was that the more you knew about Harry, his personality and his career, the more meaningful the show was.  He hit all the high points both with memories and airchecks.  New York will never have another Harry Harrison.

Harry opens the show and does a "Mr. G.'s Wacky Weather".  Mr. G comes in live, Harry plays a classic "WMCA Housewife Hall of Fame" aircheck, WCBS-FM personalities Don K. Reed and Bobby Jay stop by followed by another Mr. G. bit.   Harry plays a WABC aircheck of his kids in the studio with him from New Years Eve 1975/76.  Harry thanks all the "Early Shift" people for listening to him over the years, another "Mr. G.'s Wacky Weather" follows.  WCBS-FM program director Joe McCoy has some comments for Harry.  Harry then thanks all the educators and school employees who have listened to him over the years.  An aircheck of Harry's first day at WCBS-FM from March, 1980 is featured followed by a live interview with Bob VanDerheyden who was the program director who hired Harry at CBS-FM:

Harry features an aircheck with former NYC mayor David Dinkens from 1993.   He points out the he is not retiring but is only leaving CBS-FM.  Mr. G. returns and Harry plays a fun WMCA aircheck of himself singing on the WMCA "Good Guys Song" (and let me tell you... Harry could hold a note!).  He then thanks the police, firefighters, EMS and other public service people who have listened to him over the years.  An aircheck of Harry with his children on WABC from New Years Eve 1973/74 is featured.  Harry's children then come on live to express their love and admiration for their father.  This was probably the most touching moment of the day:

Another "Mr. G.'s Wacky Weather" followed by Mr. G live.   Harry thanks the drivers, truckers and cabbies who have listened to him through the years.  Former WCBS-FM general manager Rod Calarco calls in.  More from Mr. G. which is followed by a live WCBS-FM contest.  Harry then thanks all the doctors and other health care people who have listened to him over the years.  Harry's wife, "Pretty Patti" calls in and wishes Harry the best.  Mr G. does his final weather forecast with Harry which is very touching at the end. WCBS-FM personality Dan Taylor stops by and Harry has a very funny comment about "sleeping late":

Harry begins his final hour with the aircheck of him completely breaking up on the air.  Ron Lundy then calls in.  Harry thanks all the construction people who have listened to him through the years and Mr. G. has some final comments.   Phil Pepe (who did sports on Harry's CBS-FM show for 18 years) stops by.   CBS-FM personality Bob Shannon calls in, former NYC Mayor Giuliani is featured.   Harry then thanks those who work in the public sector and entertainers for listening to him.  CBS-FM personalities Steve O'Brien and Randy Davis stop by and Richard Simmons calls in.  Harry then thanks Post Office employees and other delivery service people for their loyalty to him.  Another "Mr. G.'s Wacky Weather" aircheck is featured followed by CBS-FM personality Mike Fitzgerald calling in and then Good Guy Ed Baer.   A brief Paul Anka clip is featured.

And then... Harry has some comments as he says a final (and difficult) goodbye followed by a special final song, "That's What Friends Are For":