Joel Crager started at ABC in 1952 and over the decades did network newscasts, local newscasts
for WABC AM and FM and even hosted a talk show on WABC-FM!

Scott Benjamin interviewed him for this web site on March 8 2006.
Thanks Scott! 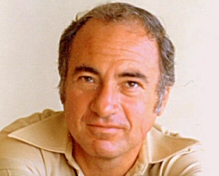 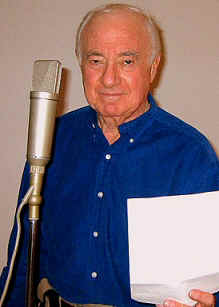 When Joel Crager talks in his deep, rich pure voice, people have listened – from the infant days of television in the early 1950s up to his present work on CBS’ The Late Show With David Letterman.

“I don’t think there’s ever been a busier voiceover guy than Joel,” said Bill Owen, who worked with Joel as an ABC staff announcer for several years.

He has been the voice for the ABC Movie of the Week, Ivory Soap, Tylenol, Chef Boy- R-Dee, E.F. Hutton, U.S. Health Care, and countless others clients.

“It can be very lucrative,” the Fort Lee, N.J., resident said of the voiceover work. “You might be able to do 15 spots in a two hour session.”

“He has the best pure voice and is terrific at interpreting copy,” Bill Owen said.

“I read the copy once and get picture in my head of what the sponsor wants to say,” Joel said regarding his approach. “Then I hear it in my head.”

His first network television work came in 1950 when he was the announcer for Super Circus, which featured Jerry Collona, who had worked with Bob Hope.

It has continued to the present day.

“I do the voice work on the gag commercials and PSA’s that Letterman does – in fact I just did two last week,” Joel said during a Mar. 8, 2006 phone interview with Musicradio77.com.

He also is the voice these days for Met Life and other clients.

“It seemed that Joel’s voice was 10 octaves lower than everyone else’s,” former Musicradio77 WABC air personality and ABC staff announcer Les Marshak said in trying to partly explain the reason for Joel’s success.  “It is so rich and pure.”

Joel arrived at ABC in 1952 and over the decades did network newscasts, local newscasts for WABC radio, both AM and FM, hosted a talk show on WABC-FM and made guest appearances on the Patty Duke television show.

“She was an enormously talented young woman who was very focused in her work,” Joel said of Patty Duke, who played both the roles of Patty Lane and identical cousin Cathy Lane in the network series that ran from 1963 to 1966.

“Even though she was just 16 when she started doing that show, she was already an accomplished actress from doing The Miracle Worker on Broadway and in the movies,” Joel said of Patty, who had become the youngest person at that time to win an Academy Award.

His interest in becoming “a radio actor” began at the All-City Radio Workshop as he was growing up in the New York City borough of Brooklyn.

Joel’s older brother, Bob Crager, had served with WOR’s Ted Brown in the Air Force and enticed him to help Joel land a position while he was still in his teens as a summer relief announcer at WSLS in Roanoke, Virginia.

By the early 1950s, he was the voice for Super Circus and So You Want To Lead A Band, which featured orchestra leader Sammy Kaye.

“When I first arrived in New York [in 1960], I was a Midwest guy who was bewildered,” Bill Owen recalled. “Joel took me under his wing.”

Joel said that one of his more interesting assignments was hosting a talk show at WABC-FM in the 1960s.

“I’m somewhat of an introvert,” he said. “So doing the show was good, because it forced me to talk to people.”

He worked with other legends – including Fred Foy, who had been the staff announcer for The Lone Ranger radio show in the 1940s and 1950s and Milton Cross, who had been in radio since its early days decades earlier.