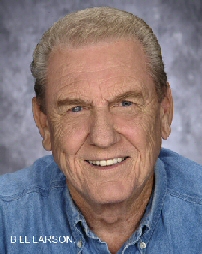 Former ABC American Contemporary Radio Network news anchor Bill Larson is best remembered for his coverage of Americas space program an interest that continues as he helps to raise money from his home in Cape Canaveral, Fla. to recreate the flight of John Glenn, the first manned orbital space mission.

It does more for the American economy than anything except the spending that is associated with a time of war, Bill said of the space program, which he covered extensively in the 1960s and 1970s for local radio stations and for the American Contemporary Network, which sent him to several launches and splash downs of the Mercury and Gemini missions.

According to www.billlarson.tv, his name is prominently displayed in the press site headquarters at the Kennedy Space Center at Cape Canaveral, along with those of Walter Cronkite, Roy Neal and Jules Bergman.

The spending on NASA represents less than 1 percent of the national budget, said the former anchor, whose newscasts were heard regularly on Musicradio77 WABC during his tenure with the American Contemporary Network from 1970 to 1980.

NASA has indirectly created new companies, Bill said in a Feb. 15, 2008 phone interview with Musicradio77.com. Every dollar spent on NASA yields $7 in return.

Bill who still does occasional voiceover work, is the senior vice president for Americans In Orbit 50 Years, which is raising money to re-create the flight of Friendship 7, which took John Glenn around the earth in 1962 and made him a national hero.

Hes a super person, Bill said of John Glenn, who later became a U.S. senator from Ohio and who sought the Democratic nomination for president in 1984.

Bill said that he speaks regularly with Jay Barbree, the longtime NBC News correspondent, who lives near him and who has covered the space program for more than 40 years.

There was a thrill in covering the space program in the 1960s and early 1970s, Bill said. It was breaking new ground.

His radio career began in the early 1950s when he landed a part-time job for 38.5 cents an hour at a station near the University of Wisconsin-Eau Claire, where he was majoring in English.

Following four years in the Air Force, Bill, who has an older brother who was once the news director at WBBM in Chicago, worked  at stations in Colorado, Texas, Nebraska and Florida, among other places, before landing the position with the American Contemporary Network.

He said that Tom OBrien, the news director, was familiar with his local radio work on the space program, some of which had been used by ABC Radio.

One of the most important parts of my life, Bill said of his decade with American Contemporary, where he typically did about 25 newscasts a week.

He said that Nick George, the managing editor of ABC Radio News at the time, further honed his ability to write for the spoken word.

You find that there are a lot of people who take three and a half minutes to say something when it could be done in 15 seconds, Bill said.

At the network we used to try to get in eight stories, with three actualities, in a five minute news cast, he added.

Bill said that he acquired valuable skills through his work in radio.

It teaches you to work fast and to meet deadlines, he said regarding the constant demands of a job where at one point he would arrive at 5 a.m. and wouldnt leave until 3 or 4 p.m. each day.

However, by 1980, he embarked on a new adventure establishing a consulting company in Chicago that helped executives, some with Fortune 500 firms, deliver speeches and interact with the news media.

You see people open up, and they are happy to be able to speak, Bill said regarding the rewards of assisting people in communicating with the public.

Through the years, he has appeared in theater productions, television and film shows and has done voiceovers for such firms as ESPN, Sears, Cadillac, Allstate and Ace Hardware, as well as videos for the National Aeronautic and Space Administration and the Air Force.

Bill said, though, that it is hard to find voiceover work in Florida, since he belongs to a union in a state that isnt friendly toward them.

Florida seems to be 30 years behind the rest of the country on that, he said.

Bill said that Americas space program needs to be re-energized.

Were not doing much now with the manned space missions, he said. I fear that at some point were going to have to play catch-up again. It would be better to have a solid program and make a large commitment for the future.