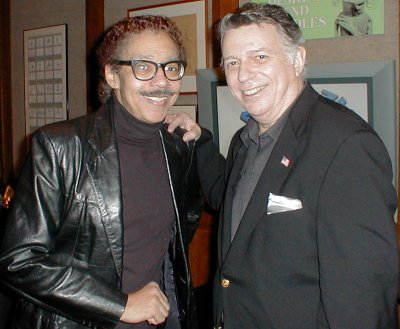 Longtime former Musicradio77 WABC night personality Chuck Leonardĺs younger daughter, Diana, said that no matter what time of day she turns on a radio in California, she hears an air personality ôthat has a style like my dadĺs, because he was versatile and worked in so many formats.ö

Although Chuck is best known for doing a late-night and a Sunday show at WABC, he worked in a raft of formats after he left Musicradio77 in November 1979.

Chuck started at WABC in September 1965 and - after Dan Ingram and Ron Lundy, who were both close friends - had the longest tenure of any of the air personalities at WABC during its 21 and a half years as a music radio station.

Diana, who at the time of the Apr. 12, 2009 phone interview with Musicradio77.com was working toward a doctoral degree in Social Psychology at the University of California at Santa Barbara toward a career in teaching and research, said that although she was young, she has some recollections of him from his long stint as the morning air personality at WXLO/WRKS in New York City, where he also was the master of ceremonies at concerts from such singers as Stevie Wonder, Kool & The Gang and Janet Jackson.

He also hosted a performance of the Ringling Brothers & Barnum and Bailey Circus.

ôIt was a big deal for me to be there and to go back stage and see the elephants,ö said Diana, now 26, who was born about three years after Chuck left WABC.

She also recalled going with her father, who was an avid sports fan, to the New York Mets clubhouse at Shea Stadium when she was young.

Years later, Diana would sometimes accompany him to WBLS when he would do his shows and help him pick tape cartridges out of the rack in the studio.

One summer while she was between semesters at Northwestern University in Illinois, where she earned a bachelorĺs degree in Psychology in 2004, Diana was an informal intern for him while he taped his shows on two of the soul channels at Sirius satellite radio.

ôHe loved Sirius, because it had a gorgeous facility and it was new technology,ö Diana said of the studios in Manhattan. ôThe trade off was that most of the shows were taped and he wasnĺt being heard live.ö

ôIt was a challenge for him at that point, because he did two different channels on Sirius and he was working on the weekend at WBLS,ö she recalled. ôBut he loved it, because it kept him happy.ö

Before working at Sirius, Chuck also played music from Frank Sinatra, Tony Bennett and other artists of that era on WQEW in New York City in the late 1990ĺs, where he mostly worked the night shift.

Diana said that Chuck, who died in August 2004, also did several commercial voiceovers through the years.

He worked regularly for V.I.M for more than 25 years, even receiving discount cards for the storeĺs clothes and sneakers.

ôI got some of my sneakers there,ö Diana recalled of her upbringing in Manhattan.

She said that Chuck had a circle of friends that went back more than 30 years, such as Julius McLaughlin, who was in network television production, and Don Stevens, who was with Con Edison.

ôHe was my coach when I did public speaking presentations in school,ö she said.

ôHe always said that he tried to speak on the radio as though he was talking to one person,ö Diana recalled.

The family was active at their church in Manhattan, where Chuck sometimes read religious passages during services and organized block parties, and Dianaĺs mother, Pamela, joined him on the church council and also sang in the choir.

Pamela worked as a disc jockey at a Playboy Club some years ago, becoming one of the first female d.j.ĺs in New York City.

Chuckĺs older daughter Kyra, now lives in Georgia and is expecting her second child this summer.

Friends have said that Chuck was extremely bright and could easily discuss a wide range of topics.

ôHe read a lot of mysteries and science-fiction novels,ö Diana said. ôHe had an Apple computer in the early 1980s, before most people had a personal computer.ö

She said that given Chuckĺs work schedule, they often shared time together by watching late-night television together.

ôIn 2002 he visited me in Spain while I was on an exchange program when I was getting my bachelorĺs degree in Psychology from Northwestern University,ö Diana said. ôWe had so much fun together. He hadnĺt traveled outside of the country much, but he loved being there.ö

She said that Chuck ôalways spoke fondly of his time at WABC, and would tell stories about funny things that happened there and how he had interviewed John Lennon and Jimi Hendrix.ö

ôWhen I was in high school some of my friendsĺ parents were impressed because they had listened to my dad when he was on WABC or in the years after that,ö Diana said.