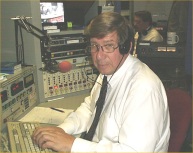 WABC was the flagship station of the
"American Contemporary Network".
That was the arm of ABC radio network news
that serviced radio stations that were primarily Top 40 formatted.
Both WABC's Bob Hardt and John Meagher were
heard on the network from time to time but so too
were newscasters from other ABC stations around the country.
One familiar name was Lyle Dean who was based in Chicago
at ABC owned and operated WLS.

In the late sixties Dan Ingram would kid about Lyle's newscasts and
Lyle's signature sign off "This is Lyle Dean in Chicago".
As a spoof, the ABC engineers got Lyle to record a number
of special "intros and outros" for Dan that the WABC
board engineers surprised him with in late August, 1969.

Since his newscasts originated from the Windy City, Lyle said that he wasn’t aware of Dan’s ad-libs regarding his newscasts until, “An engineer at WABC called me and said that Dan was teasing me on the air.”

The engineer asked Lyle - who is known for his dramatic, threatening delivery - to send a tape with some one-liners and drop-ins to WABC, including one that said at the end of the newscast that the American Contemporary Network “was a service of Dan Ingram.”

“Tom O’Brien, the head of ABC Radio News heard it at home on WABC and thought that it had gone out over the whole network,” Lyle recalled in an Oct. 4 phone interview with Musicradio77.com. “He called me and said my tenure was going to be brief and he probably was going to fire me.”

“Ingram found out and if there was any question over his power, it was answered then because he used his clout and saved my job at the network,” he said.

Lyle said that he never has met Dan, although they did exchange phone calls and letters while he was at the American Contemporary Network from 1968 to 1971.

The American Contemporary Network debuted Jan. 1, 1968, and was designed to provide concise newscasts at five minutes before the hour. It also featured music-related features, -such as Sneak Preview, which was added some time later with WABC night air personality Chuck Leonard - as well as Howard Cosell’s morning and evening Speaking of Sports commentaries.

The change occurred simultaneously with the elimination of the Breakfast Club on WABC and the 80-minute Newscope, shows that many at the station believed interfered with the music programming. Within months, WABC had the highest ratings in New York City.

“It was designed for WABC and WLS [in Chicago] and then was used by a lot of other rock stations, which I think was a testament to the influence that those stations had,” Lyle said of the establishment of the American Contemporary Network.

“It was always a struggle to make the hard news stories of the day relevant to those formats,” he added regarding the challenges of catching the interest of a music radio audience.

Lyle, who worked from 4 a.m. to noon in those days at WLS before doing his network newscasts, said he believes that the rotation of newscasts from Los Angeles, Washington and Chicago, in addition to New York City was of benefit.

“It helped to have different locations because people in Middle America could identify with a newscast in Chicago,” he said. “Even then there was concern about the eastern establishment.”

“If there was a Chicago story we pushed it pretty hard to the New York desk, and most often they would agree,” said Lyle, who noted that Paul Harvey’s newscast is probably the only radio network spot that now originates from Chicago.

Lyle said he became involved in radio as a result of his interaction with a parental chaperone on a band trip to Atlantic City, N.J. while he was playing the tuba in high school in Sterling, Colo.

The parent was the manager of KGEK, a local station, and assigned him to do station breaks.

Lyle earned a first class radio operator’s license after he graduated from high school in 1957 and went to California and then landed a position at a station in South Dakota as a general announcer.

By age 19, he was a program director at a station Colorado and later served in a similar capacity at a station in Nashville, Tenn.

But by then, even though he had spent seven years in programming, Lyle began having misgivings about continuing in that area, noting that he might never advance beyond a medium-sized market.

“Walter Cronkite had been around for a while, and I saw that other people in news had longevity,” he recalled.

Lyle said that he consulted the want ads in “Broadcasting” and landed a position as a newscaster at a Top 40 station in Omaha, Neb.

The radio news anchor advanced quickly, arriving at WLS on Friday, Apr. 5, 1968, the day after the Rev. Martin Luther King was assassinated.

It was just one of several tragedies in a year that has been frequently analyzed by historians and reporters.

“The whole year was unbelievable as to how so many things could be happening,” he said regarding the historic events of 1968 when Dr. King and U.S. Sen. Robert Kennedy (D-N.Y.) were assassinated, protests were held regarding the Vietnam War at many college campuses and there were African-American protests at the Summer Olympics in Mexico.

“I think the country learned that year that it could survive,” Lyle said. “I think it also forced news organizations to be better because they had to cover so many turbulent events.”

It was at the Democratic National Convention in late August of 1968, where protestors engaged in a riot with police, that Lyle got his first opportunity to work as a network newscaster.

Bob Bensen, the news director at WLS and later the director of ABC Radio News, notified Lyle that there was an opening on the American Contemporary Network for the convention, where Hubert Humphrey was nominated for president.

“At that time I didn’t even aspire to do network,” Lyle said.

From the fall of 1968 into 1971 he maintained an ambitious schedule, beginning his morning drive-time news shift at WLS at 4 a.m. and didn’t finish the day until the 4:55 p.m. newscast on the American Contemporary Network.

As was the case with the music programming at WABC and WLS, the American Contemporary Network newscasts typically were fast paced.

“We liked the use of sound with actualities from newsmakers instead of voice reports from correspondents,” Lyle said. “We often used the correspondents from a question and answer, where we would run an excerpt in which they could provide some additional color and be conversational.”

The newscasts aired at 55 minutes past the hour, in the hope that if listeners switched to another music station, they would return at the top of the hour when that other station started its newscast.

“I suspect the young people listening may or may not have [tuned out in large numbers] depending on whether there was another rock station in their market,” Lyle said. “I suspect that the parents who had embraced or tolerated the 55 minutes of music would listen to the newscast to learn more about the world and get the local weather.”

Lyle said he is concerned that there are fewer jobs in radio news now that the Federal Communication Commission has relaxed its license requirements. For example, WABC and other stations had news at :25 and :55 for 24 hours a day in the late 1960s.

“However, there weren’t as many news/talk stations in 1968 as there are today,” he said. “I think the lack of news on music stations is partly responsible for that.”

Lyle said that he uses his concise radio news writing style in other facets of his life.

“I probably adapted better to that than a lot of people, and have actually embraced that,” he explained. “The problem for me now is that all of my writing is geared toward compression and not expansion.”

Lyle, who lives in the Chicago suburb of Northbrook with his wife, Sharon, said the Windy City is great area for stories.

“It’s probably one of the best local news markets in the country,” he said. “There is so much going on here, where in Washington I think the national news overshadows what happens locally. New York also is a place with a lot happening because of its size. However, in L.A., it is so laid-back that I don’t think that there is as much interest in local news.”

Lyle left WLS in 1977 to become the news director at WFYR-FM in Chicago.

“It was enjoyable to build a news department from scratch,” he said.

“I never had frustrations in dealing with news people, the format or news stories,” Lyle said on his time as a news director. “However, I disliked the politics of dealing with corporate, including the incessant meetings.”

In 1984, he became a news anchor at WGN in Chicago. About six years ago he reduced his work load to Saturday and Sunday newscasts. In 2005, he began doing just the Saturday newscasts before retiring Sept. 30, 2006.

“It has noting to do with me being sick of the industry,” said Lyle of his retirement, noting that he will be the substitute-anchor on business reports for three days in November 2006 and will do other fill-in work in the future.

“It’s just that every year I get bummed out that I have to put my boat away,” Lyle said. “I’ve been in search of the endless summer in Florida. It would be ideal to spend spring, summer and fall in the Chicago area and the winter in Ft. Myers, Fla.”

Sharon recently retired as a nurse and risk manager at a hospital.

The Deans have two children – Kirsten, who is a vice president with a public relations firm in Chicago, and Erik, who manages a hedge fund company in Florida. Additionally, Lyle and Sharon have five grandchildren.

Regarding the current status of the radio profession, Lyle said that high definition (HD) radio and the XM and Sirius satellite networks would probably eventually force the terrestrial broadcast conglomerates to revise their strategies.

“HD will probably develop on its own accord,” he said. “The satellite networks have been less of a threat [to terrestrial radio] so far than had been thought. Many people aren’t convinced yet that they should pay for what they can get on commercial radio for free.”

“It’s difficult for terrestrial radio to change after companies have bought so many properties in the same market and have added more commercials, but as shareholders want the properties to be of greater value, I think there will be pressure to reduce the amount of commercials,” Lyle said.

For now, he’s looking forward to spending some time on his boat and doing some occasional fill-in work at WGN. The fast-paced life of a radio news anchor will move at least a tad slower.