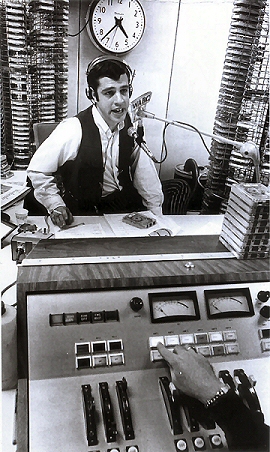 Les Marshak on the air at Musicradio WABC
1969

When broadcasting professionals hear the name "Les Marshak", the first image they have is of one of the top voice-over artists in broadcasting today.  Les has been the voice for the academy awards, for NBC Sports, for Macy's commercials and for hundreds of other commercials and events.  He's also been the voice of the Tony Awards for many years.  You've probably heard him much more than you realize.  Les started out in radio... at WABC!   Not everyone can start at the top, but Les did.  Here's the story, from Les himself, on how he won that first job at WABC:

Radio and TV were passions of mine since childhood. I attended many live radio & TV shows during the 1950's and fantasized about becoming an announcer. From the early days of Buffalo Bob Smith and the Howdy Doody Show to listening to play by play announcers, especially Mel Allen, I was mesmerized. I impersonated many of the top on-air stars. So, in the spring of 196l, when I heard about the WABC Star Search, I jumped right in. I was a sophomore student majoring in pharmacy at Columbia University and I wasn't thrilled with making suppositories and nearly blowing up the organic chemistry lab.

The Star Search began as a WABC promotion whereby listeners could watch for a mobile unit to visit their neighborhood and then audition. That, for some reason, didn't work out for the station. So, they invited listeners to send in a postcard if they were interested in auditioning in the DJ, musician, or singer category. My card was one of about 1000 selected. Auditions were scheduled at the ABC Television studio at W. 66th Street. It involved a couple of pages of commercial and promotional copy with some ad libbing. I gave it my best shot.

I was a wreck for the next few weeks waiting for the announcement. With so many entrants, my chance of winning was quite slim. Also, my already jaded sense told me that a nephew or good friend of management would cop the big prize. A few weeks later I received a telegram (remember those) stating that I was one of 12 finalists and an interview scheduled for all of us. After the interview, the heart-pounding really began. No news, no word at all for a few weeks. Then on a  weeknight in July, a phone call from a man with a gravelly voice. He said it was Scott Muni. But how did I know it wasn't one of my radio fanatic friends calling with a Muni impersonation? I played it cool. But, it was really Scott and there I was on the air hearing that I'd won the Star Search:

Les Announces the other "Star Search" Winners in his first professional voice over!
( Mp3)

When the dust settled, and more telegrams arrived from family and friends, I found myself living a schizoid life of pharmacy student during the week...and radio ("star"?) on the weekend. First on air assignment: a live broadcast with Muni from Freedomland. My whole family was in the audience watching me in my newly acquired red WABC blazer. A most surreal experience:

I assisted Scott on the air for a few months from Freedomland, then in the studio at 39 W. 66th St. reporting on High School football and basketball scores. Then Cousin Brucie, a young legend was hired to do late evenings. He took a liking to me and put me to work assisting him and appearing at times at Palisades Amusement Park. Ironically, years later he would marry my wife's best friend,Jodie, and we all became very close.

Meanwhile, I was given a title of Youth Director of WABC Radio and helped out on various promotions. I finished college (yes, pharmacy) and jumped right out of my lab coat and back into the studio. I wanted as much experience as I could get so I took a job as announcer at Radio NY Worldwide, a short-wave operation with studios in NYC. I did everything: news, celebrity interviews and every conceivable music format. But my real dream was to get back to WABC with my own show.

In 1969, I auditioned and won a spot as a summer-relief staff announcer at ABC surrounded by a sea of veteran guys (Milton Cross, Carl Caruso, Joel Crager, etc.). My main assignment  was doing overnight news at WABC Radio with Charlie Greer and then Roby Yonge. I guess you know the rest. Being at the right place at the right time. Roby deviated from the format, and took calls live regarding the "Paul McCartney is dead" rumors. He was summarily let go on the spot and for a while I inherited the all night show. I found out what it was like to read 6 live Dennison Clothes spots every hour for 6 hours. I had a ball:

That is my WABC Odyssey and a fantasy becoming reality twice during one incredible decade.

Les went on to work in New York City radio at WPIX-FM for seven years.  He has also occasionally appeared on WCBS-FM.  In addition, he assists his good friend Cousin Bruce Morrow on the "Variety Children's Telethon" each year.  But, mostly, it is Les' voice that you hear... almost everywhere!