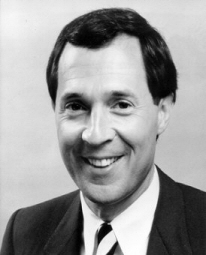 Steve O'Brien, who listened to Dan Ingram and Cousin Brucie on WABC while he was in high school, realized a dream in 1974 when he joined Musicradio77 for what turned out to be "the final phase of the station's hey day."

Steve - who tuned in to the powerful 50,000-watt station while growing up in Washington, D.C. - said he became acquainted with WABC's renowned program director, Rick Sklar, in the mid-1970s when Rick asked him to be the afternoon drive time air personality at KXYZ, the ABC station in Houston.

He helped launch the rock format at the station.

"I had family in Houston and it was a top 10 market, so I thought that it was a good move," Steve explained in a Feb. 6, 2007 phone interview with Musicradio77.com

By then, Steve had been on the air in several large- to medium-sized markets after starting his career while still in high school.

He said that about six months after he arrived in Houston, Rick called him to say that WABC was changing some of its air shifts and he wanted Steve to work at the most listened to station in the nation.

For nearly five years, he was on the air weekends, as a fill-in, and for a while in the mid-1970s he and Johnny Donovan split the days during the week doing the early afternoon hours after Ron Lundy's show was curtailed from four to two hours.

"When I was at WPOP in Hartford, I would come in with [fellow air personality] Dick Heatherton and spend a weekend with his family in New York," Steve recalled.

Dick's father, Ray Heatherton, was a long time singer and actor, and his sister, Joey, was a popular entertainer during the 1960s and early 1970s.

"We would go to 21 and to the New York Athletic Club," Steve said of his weekend trips with Dick, who became a longtime afternoon air personality at WCBS-FM and is now the regional manager for affiliate relations at the Westwood One Radio Network.

"I kind of knew that I wanted to be in New York," Steve said.

He arrived at Musicradio77 in the summer 1974 - a time when the music industry apparently was in a lull following a wave of creativity from the mid 1960s into the early 1970s.

"People in the radio and music industry in the late 1960s and the early 1970s were treated to a barrage of talent that provided a large variety of music," Steve said. "We talk of an information overload today; well, there was an entertainment overload then."

"You had the Beatles and the Four Seasons and the Beach Boys," he said. "There was such a wave of creativity in the United States and England that made it a special era because there was so much music."

"There wasn't a preponderance of good music at the time," Steve said of the state of the music industry when he arrived at WABC in 1974.

"When I was in Detroit some years earlier, there were so many good acts that you saw program directors agonize over who not to include on the play list," Steve said.

That changed a slight bit that summer as the Hues Corporation and George McCrae released the first songs of a disco era that peaked in the late 1970s with the Bee Gees' hits from the soundtrack of "Saturday Night Fever."

"People would go to Studio 54 and stay until 4,5 6 in the morning," Steve recalled of the New York City nightlife of the late 1970s.

However, the emergence of disco posed a dilemma for Rick Sklar and then Glenn Morgan, who succeeded Rick in 1977 as WABC's operations director.

"WABC never seemed to be sure how far it wanted to go with disco music," Steve said. "It would stick a toe in the water and then take it out."

"I had a ball doing the different shifts," he said of his fill-in work for most of the air personalities of that era.

For a while in 1975 and 1976, Johnny Donovan did the noon to 2 p.m. shift on Monday through Wednesday and Steve handled it on Thursday through Saturday, as Ron Lundy's show, which had run from 10 a.m. to 2 p.m., was abbreviated.

"I forget what it was, but they were irked at Ron over something," Steve said. "They paid him for the full shift, but he was on for just the first two hours."

Starting in Dec. 1977, Ron, who was one of Steve's closer friends at Musicradio77, was again on the air four hours a day.

Steve said he was content with the limited air schedule since he also was busy doing free-lance work.

He had begun doing voiceovers in Detroit some years earlier, and in New York City there were far more opportunities with so many advertising agencies based in Manhattan.

Over the years, he has worked for a raft of clients - including Hellmann's Mayonnaise, Great Adventure Amusement Park, Visine eye drops and Toyota.

Additionally, he has narrated videos for medical and pharmaceutical companies, conducted interviews for those informational programs and done voiceovers for audio books.

He even has portrayed Dragnet's Jack Webb in a television commercial for AT&T.

Samples of his audio and video work are available at www.steveobrien.net.

Glenn Morgan stated in an article for Musicradio77.com that Steve and Johnny Donovan were considered for the evening shift when Cousin Brucie left WABC in August 1974.

However, he added that he and Rick Sklar decided they were best off in their roles at that time and after considering several air personalities from other stations, they offered the job to George Michael of WFIL in Philadelphia.

George arrived at Musicradio77 in September 1974 and stayed until November 1979.

Steve said he didn't see much opportunity for a full-time position at WABC and left the station in early 1978 to handle the afternoon drive time for WYNY, an emerging Adult Contemporary station that would generate huge ratings through most of the 1980s.

"It was sad to see the station start to slide," he said of the decline in WABC's ratings as FM music stations became more popular in the late 1970s.

His interest in radio dates to his year's in grade school.

"I enjoyed listening to the fun radio stations in the D.C. area and everything that we could pick up at night from around the East Coast," Steve recalled.

As a high school senior he did on-air work at WHFS, a classical music radio station.

A short time later he was doing weekends at WDON a rock station and also working at WMUC at the University of Maryland, where he majored in English and History before he "ran out of money" and instead pursued a full-time radio career.

While still in college, he moved up the ladder to WEAM in Arlington, Va., a rock station just outside Washington.

"For a while, I was burning the candle at both ends," Steve said of his ambitious schedule. "In college, I never had much of a social life because I was a radio geek."

He left the nation's capital for a television position in Kalamazoo, Mich. and then worked at the same radio station in Battle Creek, Mich. as newscaster John Meagher, who arrived at WABC in Mar. 1968, about six years before Steve reached Musicradio77.

Steve has been active in television through most of his career.

He was the studio announcer on the $50,000 Pyramid, which was hosted by entertainment giant Dick Clark.

"He was the consummate professional," Steve said of Dick, who is even better known for being the longtime host of American Bandstand. "The Pyramid was a high budget production, so everybody on the show had a stand-in for the rehearsal. Yet in the two years that I was with the show, he never used a stand-in, even when he had just arrived from the airport after taking the Red Eye."

It was during that period that Steve met David Letterman, who was an occasional celebrity contestant on the show.

In fact, $50,000 Pyramid producer Bob Stewart later served for a brief time as the producer of David's short-lived 1980 daytime entertainment show on NBC.

Through the years Steve has made several appearances with David in skits on NBC's Late Nite and since 1993 on CBS's The Late Show.

Two of those pieces are posted at www.steveobrien.com.

"He's fun to be around," Steve said of David. "He's also very laconic and private."

"What you see over time in his preparation and the way he performs is that, just like Dick Clark, he's the consummate professional."

Over the more recent years, Steve worked part-time simultaneously at Oldies 101 WCBS-FM in New York City and at Sirius.

Steve said many of the e-mail messages related to his previous work mention his years at WCBS-FM.

"It was a very loyal audience," he said.

Cousin Brucie, who was at WCBS-FM for 23 years before it abruptly shifted to the iPod-inspired JACK format on June 3, 2005, has said in many instances the WCBS listeners loyalty was partly due to having grown up with some of the station's air personalities while they were at WABC in the 1960s and 1970s.

"Many of us feel that if management had allowed [longtime program director] Joe McCoy to incorporate his changes and ideas as far back as five years ago, [it might] have staved off what some call the 'inevitable' format change," Steve wrote in a Feb. 7, 2007 e-mail message to Musicradio77.com.

"However, the station became too 'old' for most advertisers - if you heed the party line about those over 50 not spending their money on anything!" he added.

"As far as others around the country tossing in the towel on the format, like CBS-FM, it's sad to see them go since there is still a demand and still money to be made with an intelligent version of oldies programming," Steve stated.

He worked at Sirius for nearly three years.

He said that the management at the New York City-based satellite network was "very accommodating" in arranging the taping of his shows to allow him to do fill-in work at WCBS-FM and his free-lance projects.

"I just came and left," he said. "It's a very corporate environment."

"The satellite networks will continue to grow at a moderate pace, even after a likely merger, simply because there are still many other options," Steve stated in his e-mail message, making reference to reports that XM and Sirius will join forces.

"Plus, even without iPods, the steady march of tech changes will continue to impact consumers as far as confusion and apathy about what to invest in," he added.

Steve said it probably would be some time before HD radio has a huge impact.

"It's not going to go anywhere until it is standard equipment in cars," he explained.

"There are very few HD receivers now that are even decent," Steve added.

He said that the management of Greater Media, the station's owner, had contacted him about a year before his debut, but he couldn't work for them then because of other commitments.

Steve said they stayed in touch and "the timing was right" last year for him to start waking up Central New Jersey.

He said that the increase in digitization is creating obstacles for terrestrial radio stations.

"Stations are finding it hard to maintain advertisers that they had in the past," Steve said.

In his e-mail message, he elaborated: "Terrestrial stations - in my view - are perceived by many agency people and media buyers as almost passe in many ways."

"The crowd in charge of dispensing the dollars are enamored of the Internet and newer forms of advertising, so it will be a struggle for a while until stations adapt better at serving their local communities," he added.

Although Steve didn't enjoy the success of Dan Ingram, Cousin Brucie or Ron Lundy during his stint at WABC, few air personalities have had such a wide-ranging career.