Peter Bush got the chance to live the dream that so many of us had who grew up with Musicradio WABC...
He was good enough to get a job there!!!
How about THAT!

Peter was a fan of the station and landed a job there in 1981.
He sounded terrific and clearly knew what it took to be a WABC DJ.
Scott Benjamin interviewed him in January 2006 and he
talks about his career and his time at the station we all idolized.

Peter is  probably best remembered from his WABC days as
the personality who did the last regular music show on the station.
He had a terrific idea to open up the phone lines to listeners
to reflect on WABC's legacy as a music station just before it changed formats.
It was a great idea... and here's the aircheck: 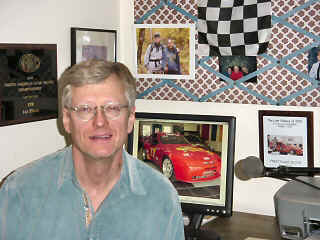 Peter Bush in his home studio
What you can't see is the number on his race car photo... It's 77!
According to Peter it "has brought me to many a podium finish!" 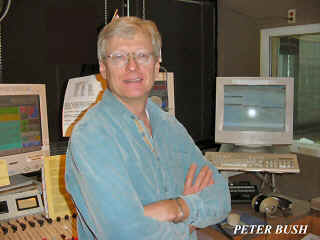 Peter Bush behind the mic at WEBE

As was the case with many kids growing up in metro New York City area in the 1960s and 1970s, Peter Bush listened to Musicradio77 WABC on his transistor radio “waiting for the next Beatles record.”

The difference was that he not only dreamed of working in the famed studio 8B, but also got the chance to do so during the last year of WABC’s run as a music radio station.

While working at 1310 WAVZ-AM in New Haven in 1977, Peter’s program director, Pete Salant, kept telling him, “You sound so WABC.”

“I can’t get it out of my head,” replied Peter, who had worked at WNYU, the campus station, at New York University.

One day Salant took him into the production room and they produced a 15-minute air check that included WABC jingles and submitted it to Rick Sklar, the legendary WABC program director who had built Musicradio77 into the most listened to station in the nation.

Peter said in a Jan. 13, 2006 phone interview with Musicradio77.com that Rick sent him a letter stating that “it was the best mock WABC air check that he had ever heard and that Peter was now in the WABC farm system."”

“I sent him a second air check,” said Peter, who was then working full-time at WKCI, KC-101 in New Haven, Conn.” Before long I was working Sundays and filling in for Ron Lundy on Saturdays when he was on vacation.”

Peter - who grew up in New Canaan, Conn., about an hour’s drive from New York City - said he had the chance over the years to become acquainted with WABC’s operations.

In the early 1970s he became a friend of David Neal, who lived in neighboring Darien. David was the son of Hal Neal, who had been the general manager of WABC in the 1960s and was then the president of ABC Radio.

That friendship led to some visits to the station of the All-Americans.

“I went there in 1972 and it was a larger than life scenario seeing Ron Lundy in the studio with his tea cup,” Peter said. “The room was electric.”

“Glenn knew about my enthusiasm for WABC and he let me come by every couple of months and sit in on a show,” Peter recalled.

He said that he “got to know” Ron Lundy and met Dan Ingram “a few times.”

He said that, ironically, they were his two favorite air personalities.

“Ingram had that shear wit,” Peter said. “He could say something witty in less than 10 seconds.”

“I liked Ron because he exuded energy, enthusiasm and warmth,” he added.

Even though Peter was familiar with WABC’s operations, nevertheless, he said that he was “star struck when he first arrived at 1330 Avenue of the Americas and as you went to the elevator, someone would say, ‘Good afternoon, Mr. Bush.’

“That was pretty powerful for someone 25 years old, especially when I would spend the day in studio 8B sitting across from engineers who had worked with the legends of WABC in their heyday,” he recalled.

Although he arrived well past WABC’s peak days, Peter said he hasn’t reflected on what it would have been like to have landed the position at least five years earlier.

“There wasn’t much chance that anyone was going to get a job there when it had 8 million listeners a week,” he said. “It was always my dream to work there. There are thousands that would have liked to have had the chance. I was nothing less than honored to be there.”

WABC had been New York City’s top-rated station through 1977, but the influence of FM started to take a larger toll in the late 1970s and by 1979, the station went through changes as longtime air personalities Harry Harrison, Chuck Leonard and George Michael were released.

“When I got there it was being billed as New York’s radio station and everyone knew that it was going to go to talk within a period of time,” Peter recalled.

“You had Ross & Wilson in the morning playing less music,” he recalled. “You had Art Rust Jr. doing sports talk at night and Alan Colmes doing an overnight political talk show.”

Peter said that even though it was apparent that Musicradio77 was about to end, “everybody just went about their business. They weren’t sure when the trigger would be pulled.”

On Sunday night, May 9, 1982, he had the distinction of doing the last music show at WABC before the station switched to a talk format.

“The greatest station in the history of radio, with the greatest quarter hour audience, the greatest cume, was ending,” Peter said. “It was sad.

“That last night, I did the show for the first hour the way that I usually did with the momentum,” he said. “It was jingle, intro, segue and then a quick back sell.”

“I think the veteran engineers, like George Musgrave, enjoyed working on my shows during that last year that it had music, because it was back to the way WABC had been in its heyday,” Peter recalled.

“However, about an hour into that last show it hit me that we should open the phone lines and let people talk about what they remembered about WABC,” Peter recalled. “It was their radio station.”

He said his work at the station helped him land a position at WPLJ, the FM side of ABC radio in New York City, for three years in the mid-1980s.

Since 1985, he has mostly worked at 108 WEBE-FM in Westport, Conn., and has, for the most part, had the top afternoon drive-time ratings in southern Connecticut for the last 10 years.

Peter, who now lives in his hometown of New Canaan, said that there were several factors responsible for WABC’s success during the 1960s and 1970s.

“In terms of radio, the execution was brilliant,” he said. “You had dynamic personalities and terrific production.

“Plus the station was well-promoted,” Peter said. “People still remember the WABC broadcasts of the Beatles arriving in 1964 at the hotel in New York City.”

“It is remarkable,” he said regarding the interest in the Saturday Night WABC Oldies Show that began Dec. 3, 2005, WABC Rewound each Memorial Day and Musicradio77.com.

“WABC has transcended all of the other media of that time,” Peter said. “It was so much a part of everyone’s life, that they haven’t wanted to let it go. “People want to have that warm feeling of the 1960s and 1970s.”