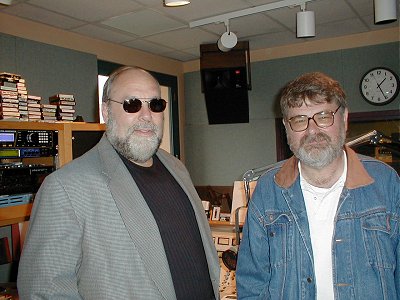 In the mid-1990s, Peter Kanze, an avid radio air check collector, had talked with former Musicradio77 WABC air personality Johnny Donovan about assembling a production with "three or four hours" of segments from shows by the air personalities from the station's music era and sending it "to some people who would appreciate it."

In the early 1990s Peter had met Johnny, who has been WABC's production director and an announcer at the station since it made the conversion to talk in May 1982.

Although they were intrigued about the potential of producing a show that would capture the flavor of the station that was the most listened to in the nation, they never embarked on the project.

WABC did air a Beatles special in 1998 and in March of 1999 Peter received an urgent phone call from Johnny, saying that he needed at least 12 hours of air checks to produce what would be the first WABC Rewound on Memorial Day, just two months later.

Peter, who had worked in an audience-research related position at WHN (AM) in the mid-to-late 1970s when it was a country station, was astounded by the volume of calls he received on the listener line during the first Rewound show.

"People were calling and saying that it was fantastic," he said.

Peter, who is the associate producer of WABC Rewound, said that when Jon Wolfert of JAMS Productions arrived for the post-Rewound talk show arrived, he asked him to man the phone for a while because he was so tired of the constant flow of comments.

Jon has had an association with Musicradio77 WABC dating to the 1960s and has contributed several sound files to Musicradio77.com.

"The show wouldn't have existed without [www.musicradio77.com]," Peter said of the web site that Westchester County, N.Y. dentist Allan Sniffen established a decade ago as a tribute to the station that was the most listened to in the nation during the 1960s and 1970s. "No one, including myself, thought that there would be that much interest."

"Allan is a computer-savvy guy who had been in radio and had the right idea at the right time," he said regarding the establishment of the web site.

www.musicradio77.com posts a new picture each Tuesday night and contains much memorabilia, including audio files, of WABC's 21 and a half years as a music radio station.

"If he had invented YouTube instead of Musicradio77.com, he probably wouldn't still be a dentist," Peter said of Allan.

He sought comments on a discussion board during the first WABC Rewound in 1999 and has continued that practice each May. He also has established the New York Radio Message Board, which has regular posts daily from fans of radio in the Big Apple.

Peter said that he began collecting radio air checks in the mid-1970's.

"I enjoyed listening to tapes from the 1960's more than the shows that were on the air then," he recalled.

Peter said he did listen to WABC in the car during its peak years as a music radio station, but spent more time tuned to its rival from the 1960s, WMCA (AM).

"The jocks at WMCA acted like people you actually knew," he said regarding what most appealed to him about the air personalities at 570 on the AM dial.

He said that in June 1964 in White Plains, N.Y., where he grew up and still lives, he was the first person to show up for a WMCA remote broadcast at the local Macy's that featured Harry Harrison, who was then the station's mid-day air personality, and Jack Spector.

Peter said he also was the last person to leave.

In the early 1980s he acquired about 200 hours of Musicradio77 WABC air checks.

He said that a July 22, 1967 air check of a Dan Ingram afternoon drive show "is close to perfect as you can get."

"It was a magnificently produced radio station," Peter said regarding WABC's sound during the most of the 1960s and 1970s. "Sometimes that worked against them. There was a generation that wanted to hear Joni Mitchell and Tom Rush and didn't want to listen to a station wrapped around zit-cream commercials."

Johnny said on the 2003 post-Rewound talk show that every year on the morning after Memorial Day he has e-mail messages from people who have tapes that they want to submit.

Peter said that, in particular, Harry Gershon has provided considerable material and Charles Blanding has supplied the Rewound staff with several pieces from 1967 to 1974.

"XM or Sirius could almost have a Dan Ingram channel," Peter said of the 200 hours of shows that the legendary afternoon air personality has provided.

He said air checks from the early 1960s are rare. The Rewound staff has been unsuccessful in securing an hour from one of Scott Muni's night show that aired from December 1960 to August 1965.

"We have pieces of Scott, but not a whole hour," he said. "I think that might not exist."

"There isn't much of 1963 or before, because unless your parents were a stereo fanatic, your house probably didn't have a taping system," he explained.

"It was 1968 when people started to have tape recorders and began recording shows," he said.

"Interestingly, we have more of Chuck Leonard than you would expect," he said of the late night air personality who was at WABC from 1965 to 1979.

Peter said that they have received new air checks of Chuck since WABC Rewound 2006.

"And it is more sparse than you would expect as far as Bruce goes," he said of the popular night air personality who was at Musicradio77 WABC from 1961 to 1974. "We have 10 Dan Ingram air checks for every one of Bruce."

"There isn't a lot of Herb Oscar Anderson audio, because he wasn't the disc jockey that you would tape when you were 14 or 15 years old," Peter said of the WABC morning air personality who was with the station when it launched its music format in December 1960 and stayed until September 1968.

He said that in October 2000 WABC management wanted to throw out a filing cabinet that had been moved to the station's new location in 1989 and apparently never opened.

Peter said that the cabinet was too heavy to move so an engineer broke the lock and discovered what in effect was the station's music radio archives - a series of tapes with jingle masters and air checks.

He said that much of that material has been used on subsequent WABC Rewound shows.

However, Peter said that after producing 96 hours of Rewound programming over the last eight years, although there is a lot of audio that hasn't been aired, the staff is starting to struggle to find items that would be termed unique.

"'We'd like to have something like an air check of Bruce doing a blooper, whether it was intentional or unintentional," he said. "We haven't had that."

"Every year we do get lucky and someone produces something new," Peter said. "But this year we're probably going to ask during Rewound for more air checks."

He said that the show couldn't be produced without Rewound tape restorian Rob Frankel.

Peter said that Rob, a producer for the ABC Radio Networks, takes the voices of the air personalities and meshes them with a more recent higher quality audio version of the music that they played a generation ago.

On another topic, Peter said that Johnny, who was an air personality at Musicradio77 from 1972 to 1982 and has remained at the station ever since as production director and as an announcer, "is humble and low-key" and has largely eschewed public comment about WABC's era as the most listened to station in the nation.

"He's not someone to get up on a soap box and say that 'I'm great,' " Peter explained. "However, Johnny has some of the best WABC stories that cannot be printed."

Peter graduated from the Announcer Training Studios on 43rd Street in Manhattan in 1972 and worked at WLNG Sag Harbor Long Island for three weekends.

"I didn't enjoy air work because I didn't have anything to say," he recalled.

Although, Peter has lived for most of his life in White Plains, in the early 1970s he became known as "the Mayor of Cleveland."

"I was always a monster fan of WKBW radio in Buffalo," he wrote in an Apr. 25, 2007 e-mail message to Musicradio77.com. "One night in Oct. 1972 I heard this record, 'Stop Wait & Listen' that just totally blew me away. Jack Armstrong back announced it as being by Circus, a band from Cleveland. I couldn't find that record anywhere."

He placed an advertisement in a record collector magazine called The Rock Marketplace and received two replies.

"One from a collector in Cleveland who sent me a copy of the 45 and put me in touch with the band." Peter stated. "I wrote them but received no answer."

In April 1974 he received a phone message from someone associated with Circus.

"I called him back and they invited me out to see them...at their expense!" Peter wrote. "That was the beginning of a long run of Cleveland boosting, PR, sussing out lost things like the Upbeat TV show master VTRs, working with the legendary WMMS, Beatle festivals and much more."

"My enthusiasm earned me the nickname 'The Mayor of Cleveland,' " he added.

"The second reply was from the PD of a country radio station in Pittsburgh," he stated in the e-mail message. "He had the 45 and lots of other cool radio stuff" from Circus.

"In time he came to NYC to program WHN," Peter wrote. "I was the only soul he knew in [New York area] and he offered me the job of music researcher for the station."

"It was a lousy title but a great job," he said in the phone interview.

"I'm very proud of what we did at that station," said the Rewound associate producer, who was at WHN from August 1975 to February 1978. "We popularized country music in New York City."

When WHN underwent remodeling in 1977, the workmen left some on-air signs and microphone flags from an earlier tenant, WMGM - a Top 40 station of an earlier era that had featured popular air personality Peter Tripp -in a space near Peter's desk, knowing that he would want to add them to his radio memorabilia collection.

He later worked for three years as a chart researcher and as a writer for Billboard, including reporting May 10, 1982 at WABC as Dan Ingram and Ron Lundy did a three-hour talk show about their association with Musicradio77 immediately before it made the transition to talk radio.

"I was there at the end and then I was part of the rebirth," he said, making reference to his work as associate producer of WABC Rewound.

From 1983 to 2003 he was the manager of WARY, the campus station at Westchester Community College in Valhalla, N.Y. He said that several of the station members advanced to careers at commercial stations.

During that period Peter, along with Ron Reggio, produced "Sweet Talking Guys On Rock N' Roll Radio" in 1991 - the first long form home video on the air personalities of the Top 40 era.

He also was the co-author, along with Frank Sulek and Bill Jaker, in 1999 of The Airwaves of New York - which The New York Daily News Online called "first rate. . . [since it] chronicles every city station from 1921 to 1996."

Peter is currently the radio engineer for "Open Road Café" - a trucker's talk show on Sirius 147 that is produced through ABC radio facilities in New York City and Dallas.

On May 28, he again will be answering the phones at WABC to get feedback on the latest installment of Rewound.

"I have the best job because I get to talk to the audience," Peter said.