The studio engineers, also known as "technicians" or "board ops" were a huge part of what
made Musicradio WABC into the successful personality oriented station that it was.
It wasn't just that they pushed the buttons at the right time or that they made split second
decisions about how to keep the sound of the station tight.
It was also their own interplay with the on air DJ's that added to the sprit and the fun of the station.

Saul Rochman engineered Cousin Brucie's Show for many years and spoke
with Scott Benjamin about his experiences at WABC... and with Cousin Brucie! 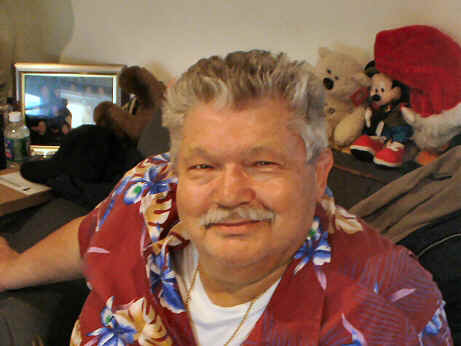 Former Musicradio77 technician Saul Rochman said his “interplay” on the air with Cousin Brucie established a friendship that became so close that Brucie became the godfather to his oldest daughter, Lisa.

“There was a lot of interplay on the air between the jock and the engineer,” he said in a May 5, 2006 phone interview with Musicradio77.com regarding the arrangement where the technical director and the air personality were in the same studio, unlike many other radio stations.

“We also used outtakes from commercials,” Saul added. “When it was appropriate to put a scream on the air, we would do it. We also would use the quick jingles with the announcer’s name when there was a pause in a commercial or in a song.”

“It was a great innovation,” Brucie said regarding the studio arrangement in a May 12, 2006 phone interview with Musicradio77.com. “It established a team spirit.”

Saul said that WABC’s studio was easier to work in than the one at WNEW-AM, where he was a technician before joining Musicradio77 in May 1962.

At WNEW-AM, where there was a glass between the engineer and the air personality, Saul commented that he fell asleep for “three or four minutes” once while engineering William B. Williams’ “Make Believe Ballroom” and the famed air personality threw something at the glass to wake him up.

Saul laughed recently when someone mentioned that an air check of Brucie’s show from Sept. 9, 1968 has segments with him delivering the punch lines while Brucie was doing a live commercial for Proper P-H acne medication, and that at another point Brucie asked him on the air to call MU-7-7500 for the Taylor Business Institute to find out if they would be answering the phone at 10:45 p.m.

“The technical director became part of the cast of characters,” said Brucie, who was at WABC from 1961 to 1974 and now does an oldies show for Sirius 6. “The listeners loved it because they were being exposed to what was going on behind the scenes.”

“Saul became known because of it and because he was there where people could see him when he worked with me during my appearances at Palisades Park [in New Jersey],” he added. “The same thing happened years later with Maria Martello, my producer at CBS-FM. We interacted on the air and she became a celebrity.”

Former WABC Assistant Program Director Julian Breen said in an Apr. 1, 2005 phone interview with Musicradio77.com that Brucie needed to have a good engineer because he was on the phone a lot and sometimes was disorganized.

Saul said he disagrees with part of that assessment.

“Bruce did put a lot of responsibility in the engineer’s hands because he was on the phone a lot,” Saul said. “And on many nights there was a small entourage of kids watching the show. We even had two priests who would visit because they were fans of rock music.

“Sometimes you had to say, ‘Stand by, Bruce,’ ” he added. “However, Bruce knew what he was doing. His work was calculated. He gave the impression that he was just one of the kids playing the music.”

Saul’s wife, Geri, whom he met when she was a secretary at CBS, sometimes sat in on Brucie’s shows while they were dating.

The couple has been married since 1966 and in addition to Lisa, they have two other grown children – Mindy and Michael.

Saul, who now works in Master Control at ABC television at 67th Street in the New York City borough of Manhattan, and Geri live in Fair Lawn, N.J.

“A good technical director has a good rapport with the air personality,” Brucie said. “You also have so much trust in that person that when you come into the studio you don’t have to look for the chair because you know exactly where it will be.

“Saul was one of the best partners that I ever had,” he added. “We had fun, he was always there for me and he participated in the show.”

“You have to know what he’s thinking before he cues you,” Saul said when asked about some of the qualities of an effective technical director. “After a while you get to know what they’re thinking.

“If you developed a rapport with an announcer, he would ask for you to do his show,” Saul added, noting that the technicians also were sometimes assigned to various duties, including tape editing and working at the transmitter in Lodi, N.J., and also did not necessarily have regular assignments with any particular air personality.

He said, as was the case at other Top-40 stations, there were many transitions for a technical director at WABC, which meant that “you had to be on your toes.

“You felt that if there was a second of dead air the teen-agers would turn you off,” Saul added.

Brucie said that he seldom has expressed anger toward technical directors through the years when they played the wrong commercial or jingle.

“I’ve always believed that if you take chances and you’re ad-libbing a lot, then there are going to be mistakes,” Brucie said. “I have seldom covered my own mistakes or the mistakes of the other personnel. Instead, I will have a good time with the mistake and make it part of the show.

“If  someone plays the wrong jingle, then you ask them to play it again, and you make a joke out of it,” he added.

Saul, who grew up in the East Flatbush and Coney Island sections of the New York City borough of Brooklyn , earned a first class radio-telephone operators license and then landed a position in 1961 at Ch. 13 television in New York City.

He initially was a cameraman, but after breaking a tube in a camera while working at a baseball game in Jersey City, N.J., he was switched to the audio side.

From there he worked as a technician at WICC-AM in Bridgeport, Conn., and then WNEW-AM, where he often worked on their broadcasts of the feature harness races at the Roosevelt and Yonkers Raceways.

Saul stayed with WABC until the change from Top-40 music to talk in May 1982 - working in the later years on the shows of several of the other air personalities, handling the dubbing of songs on to tape cartridges and serving as the engineering department’s night supervisor.

Tom Zarecki, a relief technician at WABC from 1972 to 1975, stated in a May 3, 2006 e-mail message that Saul was responsible during that era for typing the labels on the music cartridges that he dubbed in the production studio.

He commented that when the Elton John single, “The Bitch Is Back,” made the survey in 1974, the tape cartridge stated something to the effect of: “Elton John Single. . . Do Not Mention Title On Air!!”

Saul said he has high praise for the station’s legendary longtime program director, Rick Sklar, who helped generate up to 8 million listeners a week for WABC in the early 1970s.

“Rick made the right decisions about the music and he hired the right people,” he said. “He was a genius.”

Saul said he believes that despite the increasing challenges that resulted from technical improvements in FM radio by the late 1970s, WABC would have continued as a music station longer had Rick continued as program director.

“The problem was partly that Rick Sklar was promoted and it seemed like the station was operating on remote control,” he said regarding Rick’s elevation to a vice president’s position with ABC Radio in 1977.

“Plus everyone felt more like family when Rick was there in comparison to the program directors that came after him,” Saul added.

Brucie said that Saul and many of the other personnel that have worked with him through the years “have become like part of the family.”

Saul, who said he regularly listened to Brucie’s shows while he was at WCBS-FM from 1982 to 2005, said that he feels the same way about his former radio partner.

“I used to jokingly tell Bruce that I made him number one, and he would tell me that I’m the king and you are nothing,” he recalled.