John Rook On The 1967 Musicradio77 WABC Strike
by Scott Benjamin 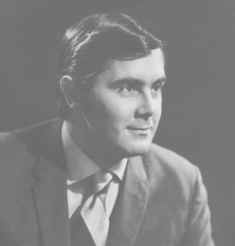 After a successful stint as the program director at the ABC affiliate KQV in Pittsburgh, John Rook had received word from ABC Radio President Hal Neal and ABC Chairman Leonard Goldenson that his next assignment would be to return Top 40 station WLS to prominence in Chicago.

After meeting with the ABC executives in New York City in March 1967, he returned to Pittsburgh and within days got an urgent phone call from Musicradio77 WABC Program Director Rick Sklar, a close friend, that he needed him to again become "Johnny Rowe" and play the hits on the air since the WABC air personalities prepared to go on strike.

He flew to New York and stayed at the Americana Hotel, which was near ABC.

The ABC engineers had been on strike for weeks and the air personalities and staff announcers were about to begin a walkout in support of the engineers. That walkout would last for 13 days - from March 29 until April 10.

Former WABC engineer Saul Rochman said in a Mar. 9, 2007 phone interview with Musicradio77.com that the technical staff had gone on strike for better pay and benefits. Picket lines were set up in front of all of the ABC operations in Manhattan, including outside the WABC studios at 1330 Avenue of the Americas.

"It started out serious," he added. "But when they started running advertisements on the air that you could see your favorite air personality outside the station, we started walking around signing autographs and posing for photos with fans. It shows you the power of radio."

"Nevertheless, it wasn't comfortable going through a strike," Brucie said. "Because of the commercials about the strike and the fact that we were a popular station, the public was extremely sympathetic. But when you're young and you haven't gone through a strike, you don't know what's going to happen next."

John had been an air personality in Denver in the late 1950s and early 1960s during a time when it had been a very competitive market for Top 40 radio.

For nearly two weeks he was the substitute air personality for Herb Oscar Anderson during morning drive and Dan Ingram during afternoon drive.

"It was one of the highlights of my career," John said in a Feb. 27 phone interview with Musicradio77.com.

He has written about his experiences during the strike in Passing Thru, excerpts from which, including his brief stint at Musicradio77 WABC, are posted at www.johnrook.com.

John said that Passing Thru, which has a publisher, would be available starting this fall.

The longtime program director and radio consultant said during the phone interview that he had not commented publicly about some of the improvements he made at WABC until now, as he approaches age 70, out of respect to the late Rick Sklar - whom he described as "a close and longtime friend who taught me a lot about programming."

"WABC had been known for playing only the top 20 hits over and over," he wrote in Passing Thru. "But that was when they also had commercials and news each hour."

"Now, with limited commercials and news, I suggested some additional music be added each hour from the recent hits category," he stated. "Rick Sklar was concerned any change in the music would confuse the station's audience, but I prevailed, allowing us to stretch out more time before replaying music."

"I think that if I had heard Bernadette by the Four Tops again I would have barfed," John said in the phone interview with a laugh regarding the high repetition at Musicradio77 WABC during the early days of the strike.

He said that for the first time, Musicradio77 WABC started to play two or three songs consecutively.

"I said we should play two or three songs in a row," John recalled. "No one in New York had thought of it."

"Do we announce between them?" they asked.

He said longtime KQV air personality Chuck Brinkman told him upon his return to Pittsburgh that WABC had "sounded like a different station" during the strike.

John said he also recommended that after the air personalities and staff announcers joined the engineers on the picket lines that the station use a combo set-up in the studio in which, as was the case at most stations outside New York City, the air personality ran his own control board.

"The rest of the world didn't operate that way because they didn't have the unions," he said, noting that WABC had several union regulations related to the engineers on the staff.

"It's easier without the engineer," John said, noting that KFI in Los Angeles was using the combo system by the early 1980s, when he was the program director there.

John said not only did Musicradio77 WABC survive the strike, it flourished.

"The Pulse ratings increased by 10 percent," he said. "We soundly beat WMCA," which was WABC's chief rival at the time for the Top 40 audience.

"Rick called and said I wouldn't believe what had happened," he said of the conversation he had with Rick Sklar after the strike was over.

He said that a short time later he received a $10,000 bonus from ABC and a letter of thanks from Leonard Goldenson.

Jeff Berman, who was the Musicradio77 WABC assistant program director at the time, said that other people who worked during the strike received bonuses and a letter from the ABC chairman.

John said he applauds the work of Rick Sklar - noting that he learned valuable lessons from him over the following years while he was programming WLS and Rick was turning WABC into the most listened to station of all time.

For example, he said that Rick taught him the value of continuing heavy air play of a former number one song that had just left the charts.

"He said people just don't buy the record and then after a few weeks throw it in the garbage," John said. "They're still playing it at home and their interested in hearing it on the radio. Even though it's dropped in sales because everyone has bought it, doesn't mean that they're not interested in listening to it."

Keeve Berman, a former newscaster and part-time air personality at KQV, lauded John's performance as the program director of the Pittsburgh station.

"He got us past KDKA in the ratings, which was a major accomplishment," he said regarding the rival Pittsburgh station.

"He had excellent relations with the record promoters, which got us songs that other stations didn't have until two or three days later," recalled Keeve, who later worked as an ABC radio newsman and at WOR-FM and WMCA-AM in New York City.

John later worked for the Bill Drake chain and after that was consulting at one point for 30 stations, including WPIX in New York City.

Now semi-retired, he does some consulting for talk radio stations and has helped establish the Hit Parade Hall of Fame.

John is one of the 28 members of the nominating committee, which votes to induct recording artists from pop, country and soul from 1950 to 1975. The panel also includes famed game show host Wink Martindale.

He said the Hit Parade Hall of Fame has a broader scope than the Rock & Roll Hall of Fame, noting that the rock hall in Cleveland doesn't include such artists as Pat Boone or Frank Sinatra.

Further information is available at www.hitparadehalloffame.org.

John, who owned some radio stations in the Northwest during the 1980s and 1990s, now lives on a horse ranch south of Coeur d' Alene, Idaho.

"The strike was a fun time," he recalled. "In fact, I think everyone was proud of themselves because I don't remember hardly any glitches during that whole time."

Be sure to check out John's web site: