Why Did WABC Have Such a Great Signal?

It did seem like you could hear WABC everywhere. During the day you could receive the station 200 miles away without any problem. At night, it covered over 38 states like a blanket. When people speak of WABC reaching 8 million people a week during its peak, they're referring to only the New York City Metropolitan area. But, if you take into account listeners from out of the local area, that number was even greater. There is 1971 aircheck of Dan Ingram where he comments "I just got some terrible news... I read the ratings and WABC is only the 13th ranked station....... in Pittsburgh Pennsylvania!"

Wow! What a signal. How was that possible?

AM broadcast radio stations generate two kinds of radio waves: Groundwave and Skywave. How effectively they accomplish this during the day and night governs how far they reach.

Musicradio WABC did both amazingly well.

Groundwave signals hug the surface of the earth. To some extent a groundwave signal bends with the curvature of the earth. This effect is greater as radio waves get longer. This is why AM radio stations on the low end of the AM Broadcast band have greater daytime range given the same power level as stations on the higher end of the AM broadcast band. One example is comparing New York City radio stations WQEW and WABC. Since WQEW is much higher in frequency at 1560 kHz. vs. WABC at 770 kHz., its local range is much less even though both stations operate at the same power level of 50,000 watts.

In engineering terms, WABC at 770 kHz. was (and still is) New York's biggest station. Like WNBC and WCBS, it had a non-directional 50,000 watt signal; but it had the advantage of a half-wave tower -- which most engineers consider an ideal height.

By virtue of its lower dial position and longer waves, WNBC at 660 kHz. should have owned the "biggest signal" distinction; but it shared its tower with WCBS at 880 kHz., and the original plan to "sectionalize" the tower to make it electrically equivalent to a half wave on 660 never worked. To this day the WFAN signal on 660 radiates from a tower considerably short of its ideal efficiency of a half wave. While WCBS was at about a half wave, its higher frequency and shorter waves produced a less powerful groundwave signal than WABC. The only other New York 50kw station in the lower part of the band, WOR, was highly directional (first using two, then three towers to produce an irregular signal pattern designed to protect other stations on its frequency, 710 kHz).

So WABC was the biggest station in the biggest market. It was the only New York station on the lower section of the AM dial with a half wave tower! In fact to this day, it still has the biggest signal.

AM antenna design and all the other variables involved in transmission choices are something of a black art as well as an interesting science. For the strongest groundwave coverage, electrical lengths in excess of 1/2 wave (180 degrees) are desirable. In fact, 5/8 (225 degrees) is considered optimum, because it produces the maximum possible groundwave (or horizontal lobe) from a single vertical radiator. It also produces a small lobe at a high angle up toward the sky, which can be a problem in some regions because it reflects back on top of the groundwave. This is sometimes responsible for the distortion heard at night on local AM radio stations.

Of course, you have to remember that the wavelengths get longer and longer as you get to the lower part of the AM broadcast band. As a result, the length of a tower to achieve 5/8 wave, or even 1/2 wave, gets extremely large. A 5/8 wave tower for a station such as WFAN at 660 kHz. would be tremendous.

WABC's transmitter position might be considered less than ideal, since it doesn't sit on salt water like so many other New York stations; but it's a lot better than the original Bound Brook site, and actually gets a decent angle on Long Island. This is because Manhattan and Long Island have extremely bad ground conductivity, which is one reason WQEW (formerly WQXR at 1560 kHz.), which transmits from Maspeth Long Island, has such a hard time in New Jersey. WCBS and WFAN have better angles on Long Island, but don't do nearly as well as WABC in New Jersey.

Interesting fact: at one time, a common tower for WABC, WNBC and WCBS was on the drawing board, but it turned out there was no way all three -- which are relatively close to each other on the AM band -- could share one tower without severely compromising their audio quality to avoid interfering with each other. But the plan grew out of what we might call "tower envy" for WABC's superior system.

While groundwave signals "hug" the surface of the earth, skywave signals work by "bouncing" off of the ionosphere. During the day this particular layer of the atmosphere absorbs radio signals. But at night, it acts as a reflector bouncing medium wave radio signals back to earth. This bounce or "skip" allows these signals to travel great distances. And, in WABC's case, it was a non directional signal. In effect, given the right "conditions" its signal could go anywhere..... and it frequently did!

At night, WABC reached incredible distances. It was a class 1-B Clear Channel station. This meant that at night, there was only one other North American radio station on 770 kHz. That station was KOB in Albuquerque, New Mexico (Today, KOB is KKOB and there are other stations on 770 kHz. at night due to changes in F.C.C. regulations). As a result of this clear channel status, you could pick up WABC's nighttime skywave signal across most of the eastern half of the United States, Canada and at times, Europe. There were even reports of reception in Hawaii, Australia and South America.

Many clear channel stations (examples include WBT in Charlotte NC, WTIC in Hartford CT, WBZ in Boston MA) have directional nighttime patterns. This gives them a terrific signal in some directions and virtually no signal in other directions. Such was not the case with WABC.

Ham radio operators (yes, I'm one) will tell you that good conditions include things like time of year (fall and winter are the best), sunspot cycle (every eleven years it starts over), and stray atmospheric disturbances. That is why on some nights WABC might have come in like it was your local AM radio station while on other nights you could not hear it at all. And, of course, radio stations on adjacent "channels" could splash over and interfere. In WABC's case the adjacent stations were (and still are) WJR in Detroit MI at 760 kHz, and WBBM in Chicago IL at 780 kHz. If either of these stations were local to you then WABC's skywave signal was more difficult to pick up.

1921: WJZ at 833 kHz. starts broadcasting from Newark, NJ. The station is owned by Westinghouse and has an output power of 3000 Watts.

1923: WJZ is purchased by RCA, moved to New York City and its frequency is changed to 660 kHz.

1927: NBC creates the "Blue Network" of radio stations with WJZ as the key station.

1936: WJZ's transmitter site is moved to Bound Brook, NJ and operates from a 640 foot tower.

1943: WJZ, along with NBC's "Blue Network Company" is sold by RCA/NBC to Edward J. Noble and Associates.

March 1, 1953: WJZ's call letters are changed to WABC which stand for the "American Broadcasting Company".

And, just to make it a little more confusing... 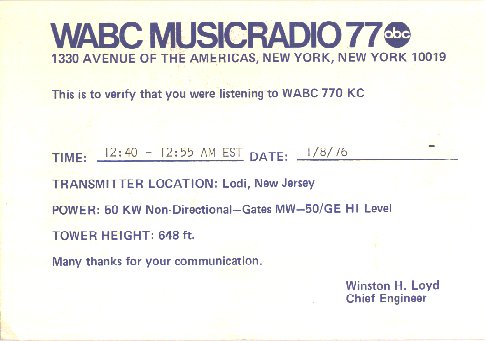 This WABC "QSL Card" is from 1976. I sent a letter to WABC reporting that I had listened to the station in Miami, Florida.