Barry Siegfried was the engineer for Ron Lundy's last show on WCBS-FM. As seems to be true for most people who know Ron, Barry has great affection for him; so much so that he volunteered to "run the board" for Ron's last show.

Barry contributed this account of that day and what it was like to know Ron Lundy over many years. It's hard to imagine that anyone in radio attracts more respect and admiration from both coworkers and listeners than Ron Lundy. Barry's account really captures that feeling.

I first met Ron Lundy when I visited the WABC studios in 1969 for a Battle of the Bands contest. There were only two of us in the "band" so the engineer who recorded our tape demo was nice enough to offer a tour of the studios to us. We were lucky enough to sit in on Ron Lundy's show for a little while. I was 19 years old, a sophomore at Rutgers University majoring in Biological Sciences and I had absolutely no idea at that time that I would end up as a broadcast engineering professional. As I recall, Ron was playing a Bob Dylan record, and my band partner asked him a question about the record. I don't remember exactly what the question was (which is really unimportant anyway) but I surely do remember Ron's answer. His response to my partner's question was, "Well, I really don't know the answer to that. You know, you might not believe this, but I really don't know very much at all about this music." I nearly fell off my chair when he said that!

So we come forward now 16 years to 1985, when I first started to do the board operation for Harry Harrison's morning show for WCBS-FM. I started working with Ron Lundy during the time that I was engineering for Harry. When Harry would go on vacation, or take a day off, it was usually Ron that filled in for him.

I absolutely *loved* working with Ron. Ron really knew how to make people happy who listened to him. His overall sense of what was good and bad radio was phenomenal. I had so much fun working with him.

The working relationship with Ron grew into a friendship, and there was actually a period of time in the middle to late 1980s when Ron and I got together occasionally during off-hours. I would visit with Ron and Shirley in their apartment on occasion, and we even went to a movie or two together during that period.

Sometime over the summer of 1997 everyone at WCBS-FM learned that Ron would be leaving. It was somewhat of a shock to all of us, because nobody could really fathom what life would be like in the New York radio market without Ron Lundy on the air between 9 AM and 12 noon. But once Ron had made his final decision and the date was picked, it was just a matter of waiting it out.

I approached Ron about 3 weeks prior to his departure and asked him if I could work with him one last time before he left. I even offered to arrange my schedule to come in and run the board for him on any show of his choosing because I didn't want to get in the way of any specific plans he might have for his last few shows.

A day or so later, he told me that he'd been talking to Joe McCoy (WCBS-FM Program Director) about my wanting to work with him, and Joe thought it was a good idea. In fact, Ron asked me if I'd be interested in working with him on his last show. I told him that I really didn't have to do that, and that all that I wanted to do was to work with him on any one of his last few shows before he left. I told him that I thought that things would be pretty crazy on his last day, and he said to me that this is exactly what he was thinking as well, and that it would probably be really special for him if he could be relieved of "board duty" on that day. So, I agreed to work with him on his last show.

I must tell you that I was extremely honored to have been given the opportunity to work with Ron on his last show. As it turned out, WCBS-FM management decided to give him a board operator for each of his shows during his last week on the air, and Ziggie Pelzer ended up running his board for the three shows which preceded his last one.

When the day of Ron's last show arrived, I was like a kid again. I was so excited to be able to get behind the board (after about nine years of *not* having worked with him) and work with one of the greatest professionals in the business one last time. I also knew it would be one of he most difficult shows I would ever have to do.

With all that was going on in the studio that day, I knew that I would have to pay 125% of my attention to the show, because if I didn't, nobody else would. I could not sit down for the entire time that I was at the board, and remained on my feet the entire time. It just went by so fast. I wanted Ron to have the most fun he could ever possibly have on that show, and when I asked him later on whether he had had fun, he said that he did, and it really pleased me to hear him say that. I was paying such close attention to the show itself, that I actually missed a lot of what was going on in the studio. I can't ever remember when I had to concentrate so intently on an air show as I did on that day.

By the time we reached 10:00 AM, the format was starting to go out the window and we were flying by the seat of our pants. People started to trickle into the studio, and Ron was starting to put people on the air.

I was particularly interested in what the interplay would be like between Dan Ingram and Ron, and as usual, it turned out to be a classic. Harry Harrison also spent a good deal of time with us in the studio and he seemed to be particularly sad that Ron was retiring and would no longer be following him on the air each day. As the clock approached noon, more and more people kept coming into the studio and staying there. For a brief 3 hours, everyone in the studio simply stopped the routine of what they normally do to say goodbye to a wonderfully talented air personality and a very kind person. It was really very touching.

I think that the air checks really capture the "flavor" of what was going on in the studio that day. It sounded like there were at least 30 people in that studio, and at one point, there probably were. During the last few minutes of Ron's show, the emotional energy in the studio was absolutely incredible. Very few people in our business actually get the opportunity to say goodbye to their listeners and coworkers on the air. It was definitely "Ron Lundy" day at WCBS-FM (and in the entire broadcast industry for that matter), and I know that deep down inside, Ron feels incredibly lucky to have had that opportunity. But he always maintained the highest degree of professionalism on the job, even up to the point where he signed off and we played "Bye Bye Love" and during those last few minutes he never once lost it, not for a single moment, even when he was saying his final good-byes and talked about it having been "a great run" and a great 32 years for him in New York radio.

Will anyone who ever listened to or worked with Ron Lundy forget him or the impact that he had on their lives?

I don't think so. 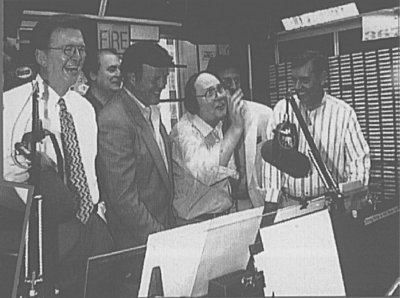 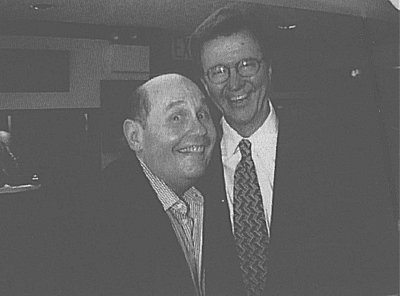 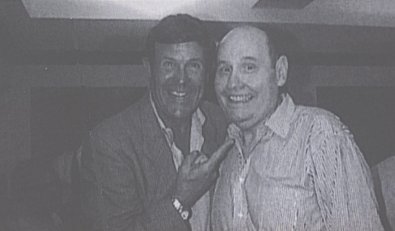 And, don't forget, Ron's last shows are all available at this website as well as additional pictures, tributes and commentary.